After awhile, I got up again, set the timer, walked over to the altar in the corner of my bedroom,  lit a stick of incense and Sat down in front of a different blank screen. 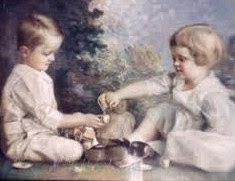 Although I first read that story in Zen Flesh, Zen Bones back in 1970,  I now realize I had only glimpsed the rim of that empty cup.  Even as a 24 year old, fresh out of college and engaged in my first year of teaching school, I certainly "got" that there is a difference between the accumulation of knowledge and wisdom.  By then, I'd run into factory workers during my seven years of summer employment that appeared to have a better handle on what the Real Deal was than most of my college professors. I also sensed from the story that arrogance probably wasn't going to cut it with a Zen master, a fact that I've had verified a number of times over the years.

This week, the Wednesday Mindfulness Circle explored the 6th slogan of the Lojong Teachings: "In post-meditation, be a child of illusion."   One of the most haunting of the 59 aphorisms that make up this Tibetan Buddhist system of mind training, it is also, perhaps, one of the most radical.  It seemingly flies in the face of conventional wisdom.  Rather than exhorting us to "grow up and get real", we are encouraged, instead, to recapture the open and spacious sense of wonder that characterizes the mind of the child as we arise from our meditation cushion to move through the day to day activity of our lives.

As Mindfulness Practice develops and we become more acutely aware of the fluidity and transparent nature of our own thoughts and emotions, the ephemeral nature of "mindstuff"
(READ MORE)
becomes more obvious.  With Practice, our perspective widens and deepens, and in that gracious spaciousness of deepened Awareness, something shifts. At a certain point, we see for ourselves that "reality" is not all that solid. and that the boundary between imagination and perception are not as hard and fast as we were led to believe. In fact, much of what we experience is actually an inverted form of "make believe".  What we believe makes it so.  Conditioned as our minds are by conventional society, what we "know" is not only limited by the organic limitations of our sensory apparatus, it is largely a function of the stories that we have accumulated, consciously and unconsciously, throughout the course of our lives. 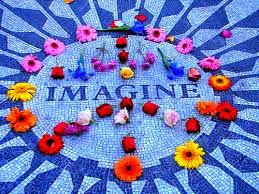 (* The visualization practices of Tibetan Buddhism and other spiritual traditions, like prayer, are are actually mechanisms that harness the power of imagination to prime the pump of reality in the desired direction. )
Posted by Lance Smith at 1:53 PM

Lance, I love this! Annette