Years ago, when I was in residence at Insight Meditation Society, my Dharmabum Buddhy Jimi (not Hendrix) grabbed me by the shoulders, and with eyes as big as saucers,  asked me "Have you had a direct experience of the GREAT VOID?"

Unlike Jimi, at that point I had not spend much time with the Teachers and Teachings of the Tibetan tradition where the term Great Void was commonly bandied about.  Although I'd read a couple of translations of The Tibetan Book of the Dead, my wanderings through the gringo Buddhist world of the 70's and 80's had primarily been focused on Zen.

Like Jimi, I was then drawn to Insight Meditation Society.  Most of the teachers at this retreat center in Barre, MA drew their inspiration and practice from Theravada Buddhist teachers.  In that tradition, Nirvana seemed to be the goal.  It seemed like a much more palatable destination.

The term shunyata, most commonly translated as "emptiness" or "voidness" seems to freak a lot of folks out.  It doesn't seem like a particularly appealing final landing.

Yet, at age 75, having continued to peer into this particular diamond from every direction imaginable, it's become quite clear to me that the teachings regarding shunyata, as expressed by Pema Chodron and similarly inclined teachers, have been gently and inexorably transforming me.  (Another 25 years of taking time to sit still doing nothing on the zafu for at least an hour most every day probably helped a bit too, ya think?) More and more, these teachings have grown from mere theory into an ongoing Practice.

In an on-line talk I heard awhile back, Pema Chodron used the term "positive groundlessness" to try to capture in words what shunyata may be.  At the time she said she wasn't convinced she'd continue to use that term.  She said she was just "trying it out."  That, in itself, is a great teaching.  It seems clear to me that what is, is always beyond words.  It's beyond belief.

As Practice has deepened, I've found that when I can actually stop for a moment and let go of any expectation of getting something (or even an idea of what that something might be) and actually experience what is coursing through my awareness and every cell of my being in each moment, what IS becomes self-evident.

I can't be holding onto anything at that point -- or pushing anything away. I have to remain empty handed.  This is not just a Buddhist thing.  It seems to me that this is the Strait Gate that Yogi Jesus alluded to toward the end of the Sermon on the Mount -- after he pointed out the various dysfunctional ego trips that we all are prone to manifesting -- and told us to knock it off and love instead.
What is  clear, through all the Wisdom traditions of the world, is that relying on a self-serving ego doesn't cut it.  As Chogyam Trungpa once said, "Enlightenment is the ego's ultimate disappointment.

Most of us are conditioned quite strongly to be self-absorbed in doing most anything except stopping to truly let go of everything (especially the thoughts going through our head.) We are rarely truly Present to the reality of our ongoing experience.  Although many of us may have had a few glimpses, it seems to takes a commitment and a serious surrender to finally realize that this is IT.  At that point, you know in your bones that you don't have to die to go to heaven.  The Eternal Life that Jesus proclaimed is coursing through your veins each and every moment.

When those moments of perfection dawned on me, I saw for myself that all the stuff that Buddha and Jesus and Lao-tse and a host of others have been talking about, even been willing to die for, is Absolutely True.  We each exist as a manifestation of the Divine, inseparable from infinity, constantly in the embrace of One Love -- whether we realize it or not.

What Is and What Is Not are not two.  Form and Emptiness are inseparable. They are the warp and weft of the Sacred Tapestry that we are collectively weaving and being woven by in every moment.  In the world of concepts, you can't have One without the Other.  Beyond concepts, there is only Reality.

The more we melt away the hard-headed clinging to strong opinions about what we think is true at any one moment, the more we melt away the hardness of heart that we've developed in a misguided attempt to protect ourselves from the sometimes gnarly edges of Life as it is, the easier it gets to appreciate the inherent joy and wonder that is ringing silently in the midst of each moment.

Of course, it is true that the thought of non-being itself can be scary as hell. The thought of our inevitable demise -- Death -- is only one aspect of this seemingly frightful proposition.  In our bipolar quest to be both free and secure, the idea that there is really nothing lasting and permanent to hold on doesn't sit easily -- unless we take time to Sit with It.

Our whole ego dance is based on the impossible task of trying to shore ourselves up against the ongoing uncertainty that Life presents as part of the fabric of each moment.  In a fitful (and primarily subconscious) attempt to prove ourselves to be essentially independent entities of some sort, we have amassed a whole litany of thoughts, feelings and behaviors that, ultimately, will never provide either the freedom or the security we are grasping for.

I am so grateful to the Teachers and Teachings that moved me to walk this path.  They helped propel me to Sit Still long enough over a period of time to get a better sense of what Alan Watts called the Wisdom of Insecurity and incorporate it into my day to day life.   I've always been sort of an insecure wise guy anyhow -- and now it's a lot more fun.

In fact, at this point, I know that it will take what the Zennies call Ceaseless Practice, because I am mostly conditioned to be a real bozo.  (I'm also surrounded and immersed in a society that often advocates and supports human ego, with it's manifestations of greed, hatred, and delusion. ) But, after all these years I have come to trust.  I know my heart's in the right place.  I know that I'm here trying to help alleviate suffering.
I've also seen that as I continue to open my heart and clear my mind in this effort, the One Love has my back as I dance and stumble ahead toward my final curtain call.  It would be nice to go out with a bow. 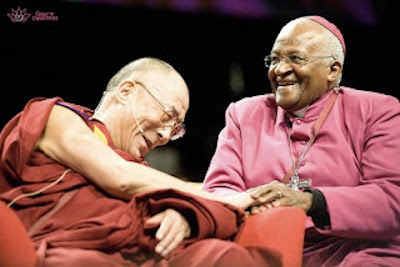 Sitting here now, in the space-time warp of my own imagination, I'm out behind the kitchen at IMS.  This time, I don't recoil as my old Dharmabum Buddhy Jimi grabs me by the shoulders.  In this moment, I can even conceive that the look of horror in his eyes when he asked me about experiencing the Great Void was just my own projection.   (Maybe Mahakala was shrieking in my ears, not his?)
It doesn't matter.

Whatever the case, this time, with another three decades of Life and Practice under my belt, my imagined response would be to shrug and grin, then proclaim.