Your Courtesy Wake Up Call!

I'm sitting here with the embers of yet another perfect sunset glowing on the horizon, the evening vespers of songbirds, frogs and crickets wafting through the window on a delightful, scented breeze.   It's pretty easy to feel Perfection at a time like this. 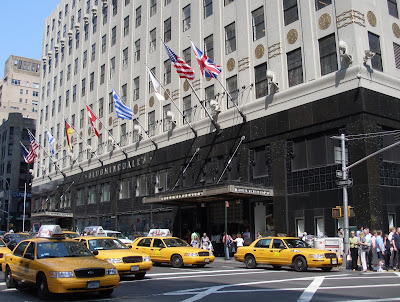 Yesterday,  my morning practice took place perched on the concrete shoulder of a lightpost on 3rd Avenue right around the corner from Bloomingdale's in NYC with a 10,000 volt stream of traffic and people and sirens and car alarms streaming through my awareness, the occasional rumble of the R train vibrating beneath me.  Feeling the Perfection of that was, perhaps, a bit more challenging at times.


On Monday I had mentioned that even a commitment to sit for 3 minutes on any one day can and will have a dramatic effect on the cultivation of a regular meditation practice.  The commitment itself transcends the length of time involved.  I'll stand by that.  Three minutes was my commitment yesterday morning.

I woke up at my Buddhy Howard's place in Astoria after a long day on Tuesday which included the drive from Greenfield to Queens with Rebecca and Annette, a shuttle ride with them from their hotel into Manhattan, a walk across Central Park South, a ride uptown on the subway from Columbus Circle to rendezvous for dinner--and then drinks--and then dessert--with my youngest daughter, Coriander, (and Howard) at various establishments on the Upper West Side.  Then, well past my bedtime, there was another subway ride downtown to Times Square to then wend our way through the catacombs to catch yet another subway back to Astoria with Howard to then send Becca and Annette back to their hotel in Long Island City in a cab.  I then crawled way to sleep on the sofa couch.

For some reason, I slept in.


Arising on Wednesday at the ungodly late hour of 8:30 AM, I had raced out the door to hoof it about 5 blocks back to the R train to head back into Manhattan to grab a cup of coffee and position myself to meet Rebecca and Annette at their shuttle stop across from Bloomingdale's on 59th Street.  As it turned out, I was there in plenty of time.

So, after quaffing the coffee, I decided to do what I do most mornings: I'd Sit!

Having Sat now with #OMG! many days a week on the Greenfield Commons for a year and a half now, Sitting in public was "no big deal".  I found a convenient spot.  Sitting upright Taoist style with the soles of my feet on the ground, I could certainly do 3 minutes.

Three minutes turned into about 30 quite effortlessly--but who's counting?  For the most part, I just hummed with the City. It was quite Sweet.

I hope you have found that 3 minutes at least once during the week so far.  If not, you've got another few days to get it done at least once before you have to "fess up" on Monday.* LOL
One Love,
Lance

*Jane and Michelle have even more time to get it together since they'll be out of town on Monday--but who's counting?