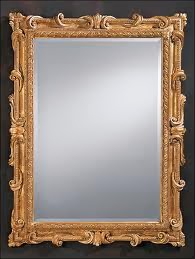 Although at one point back in the 1970's I actually practiced Mirror Gazing as a way to explore aspects of my subconscious, these days I don't spend much time in front on a mirror.  Being retired now,  I don't have to appear with the proper clothes and haircut at the proper time each day. Sporting little hair on the top of my head, I usually feel that the washcloth is a good enough brush--and Betsy is generally quite expressive at the points at which I cross the line between kempt and un, and will periodically come at my beard and mustache with a scissors and great zeal.

These days, Sitting Practice is my primary mirror.  Taking the time to gaze steadily and kindly at the flowing river of Mind as it merrily rolls along is increasingly interesting at this stage of the journey.  In fact, inspired by one of the MMM regulars, Stephanie, and her account of establishing an evening practice for the past couple of weeks, I added a third period of formal meditation yesterday before bed for the first time in quite awhile.  It was grand.

As the Practice deepens, it seems that even the more gnarly emotional whirlpools that swirl through don't seem to rock the boat all that much.
(CONTINUED...)
Even the bursts of violent self-hatred and anger that emerged after I managed to damage my daughter's mini-van with an errant turn last week were just waves crashing over the rocks. They quickly became water over the dam--on and off the zafu.  Just around the bend, the river formed a clear, deep pool mirroring the grandeur of the autumn foliage and a brilliant clear blue sky.

In the Tibetan tradition of mind training, Lojong practice consists of working with a series of aphorisms as a framework for understanding how Mind operates, and as an aid in actualizing our commitments to kindness, clarity and compassion.  Although I haven't memorized these slogans as a formal practice (there are 59 individual slogans grouped into seven sections),  reading several translations and commentaries have been quite useful in the past few years.  One slogan in particular, "Drive all blames into one" has been one of the most helpful. In his book on Lojong, Training the Mind and Cultivating Loving-Kindness, The Tibetan teacher Chogyam Trungpa claims that it is "the essence of the Bodhisattva path."

Essentially, in a radical departure from our conditioning, whenever we find ourselves blaming someone for something in our lives, whenever we find ourselves assigning fault with an aggressive emotional charge, we are called to take ultimate responsibility for what is occurring.  Rather than allow the usual storylines  to carry us along the crest of aggressive emotions, rather than roll ahead with the myriad ways which we externalize the sources of our discomfort, we use the situation to discover for ourselves exactly where and how we are stuck.  Rather than continue to harden, we allow ourselves to soften, perhaps, ache a bit--and take a good look in the mirror.

Then, in a perhaps even more radical departure from the habitual way that we react to the world, Trungpa  points out that the practice of "driving all blames into one" also means that whenever we are blamed for someone else's discomfort that we actually accept that blame as well--and do what we can do to correct the situation.  (Which sometime means really letting go and doing nothing.)

A commitment to look in the mirror of someone else's reaction and sit with that one for awhile is no mean feat.  At first you may find yourself convinced that their point of view is nothing more than the distortions of a fun house mirror,  but as you let go of that one and again take ultimate responsibility, you have an opportunity to see what you're really made of--literally.

It's not "easy", of course.  You may find yourself sitting with fear, humiliation, confusion, anger, shame, guilt; all the emotional boogie men imaginable are liable to have their say. Yet, as the Practice deepens, it seems to get a bit easier.  Sitting still, breathing in, breathing out, you watch with great care and gentleness.  At a certain point there is just the mirror.  Then it too dissolves.

Then there is just the grandeur of the autumn foliage and a brilliant clear blue sky.