"What we expect is to be truthful; to be kind; to try to share; to try to love one another. Some folks don’t recognize that as a discipline: They say, "Oh, that old stuff…." And it may not sound too difficult, unless you’ve ever tried it. But if you ever try it, you’ll know it’s an exacting discipline."
--Stephan Gaskin, This Season's People

The only time I saw a somewhat severe Burmese Buddhist meditation master (and his entire coterie of attendants) break down into belly laughs was when he pointed out that most Westerners seem to think that their mind is in their heads.  After a few moments, regaining his composure, he then raised his hand to his heart and continued.  Although I don't remember the exact words his interpreter used, the point seemed obvious.  It resonated with what I had felt years before as I sat in tears of joy during one of those perfect moments that Life seems to grace us with now and then.

Jesus had it right. It's all about Love.

As I learned it from my first Zen teacher, heart, mind, spirit are the same word in Japanese. Derived from a chinese character, the word shin makes no distinction between these three realms of existence.  They are seen as inseperable, one and the same.  In the Oneness of Being, beyond any words we use, our bodies, our minds, and our spirit are a seamless whole.  It's why I practice meditation.  I'm trying to "get it together", to live a life of Integrity as best I can.
Over the years, I've found that as we spend the time to observe carefully how heart/mind/spirit operates within our own experience, as we commit ourselves to the Practice both on and off the cushion, we can not only develop a clearer and more appreciative understanding of the exquisite and intricate Web of Life that we are, we can actually begin to get a handle on how to slowly and gently become the person that, in our heart of hearts, we wish to be.  Then, at a certain point, we can even realize that we actually ARE the person we wish to be--and always have been!  We find that, even with all our flaws, with all our neurosis and conditioned patterns, we are absolutely perfect as is--and so is everybody else!  There is nowhere and nobody that is beyond the embrace of the One Love, whatever the karmic "predicament" may be at that moment.

The major question that propelled Eihei Dogen, the founder of the Soto School of Zen, to leave Japan
(CONTINUED...)
and seek a teacher in China seems to have been, basically, "If we are all already perfect, why bother practicing meditation?"  I've seen that question asked in any number of ways over the years.  Though it does certainly seem to defy logic, the answer, for me at least, is pretty clear: Both on and off the cushion, Practice doesn't make perfect.  Practice is perfect. And, as John, a newcomer to MMM said in the Circle on Monday, it is a verb, not a noun.  It continuously flows from and returns to pure yearning, pure intention, pure effort and pure fulfillment.  It's something I just do now--as much as I can.

It seems to me that the heart of the matter is that it is all a matter of the Heart. In the gentle caring of an open heart, we can actually see what each moment brings to us more clearly.  We may actually be able to be kind, to help out when needed.  As the Dalai Lama points out, it's as simple as that.  But simple doesn't mean easy. It takes Practice.

I'm grateful to the Teachers and Teachings that I've stumbled across over these past decades for pointing that out--and for those that continue to surround me each day. (Right now it's the whining of two year old Abbie as Betsy patiently huddles with the Twins for a nap on the couch in the other room.)

But, please, don't take my word for any of this.  See for yourself! 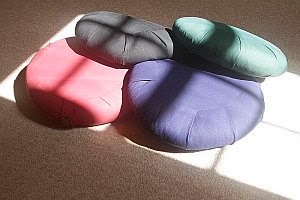