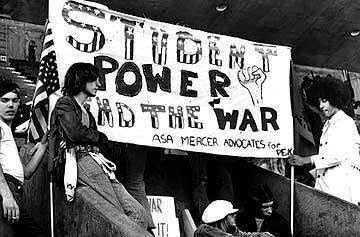 Although I usually refrain from allowing those "four letter words" to roll out of my mouth when I'm upset, the closer I get to a spontaneous expression of awe and joy and gratitude for the Absolute Wonder of Life, the more likely am I to launch forth an "F bomb" -- usually in its forms as an adjective or adverb.
(For example: How F***ing cool is that?)

To a whole bunch of us back then, napalm seemed profane and obscene.  Launching F bombs?  Not so much.

In fact, "colorful" language, like colorful clothing, long hair,  and psychotropic drugs, was an integral part of the youth culture.  We were intent on breaking the monochrome norms of a mainstream society that appeared to be worshipping the false gods of materialism, competition, consumerism, environmental degradation and warfare.  So called "polite society" was praising Jesus in one breath and supporting the extermination of people halfway around the planet with the other.

We chose, instead,  to pursue a life based on the values of freedom, peace and love.  For many of us, "Thy will be done on Earth as it is in Heaven" wasn't just something that folks were supposed to recite in church on Sunday.  We believed we were supposed to be living that way every day as best we could!

And, as opposed to those folks who we saw as the purveyors of hypocritical peity,  we were intent on having some serious fun along the way.  A bit of "foul mouth" sometimes spiced things up.  As one of my guiding lights, the late Stephen Gaskin, put it at the time: "We're out to raise hell -- in the Bodhisattvic sense."

So, how does swearing fit into this picture?
(READ MORE)
In the English language, it really isn't such a leap, actually.  The verb "to swear" itself takes us to the Gates of Zen, where words and concepts have only a minimal utility and irreverence can be the highest form of reverence.

By definition, swearing can involve either uttering an utter profanity or doing what could be considered its exact opposite -- taking a sacred oath!  WTF? One word spans the conceptual chasm that seems to separate the Sacred and the Profane.

I swear!  Take a look at the dictionary.

Nowadays, even when I avoid foul mouth, I still swear a lot.  I recite the Bodhisattva vow at the end of  my (almost) daily morning meditation practice.  It is the foundation of my life.
The first time I read the Bodhisattva Vow I was hooked.  It's been reeling me in ever since.
Although the translations of the four basic tenets of this traditional Zen Buddhist pledge vary, the central meaning is pretty clear:  I vow to get my act together well enough to be able to help out. 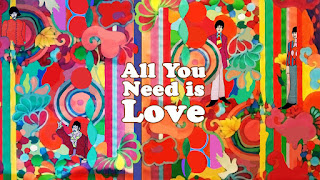 The fundamental foundation of the Bodhisattva Vow is, I think, quite clear.  Yogi Jesus -- and the Beatles --  identified the bottom line.  Our task here on this planet is to cultivate a special quality of consciousness.   One name for that mode of being is also a four letter word:

Great post - succinct and clear, a reminder of what's important. Thanks!

My long, poetic comments were lost?