Though It Is Impossible...

"When we protect ourselves so we won’t feel pain, that protection becomes like armor,
like armor that imprisons the softness of the heart."
-- Pema Chodron
"If we learn to open our hearts, anyone, including the people who drive us crazy,
can be our teacher."
-- Pema Chodron 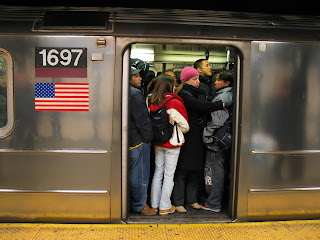 There is nothing like a weekend in New York City to bring you face to face with yourself.

I generally consider myself to be pretty open-hearted, relatively unafraid, able to meet most folks eyeball to eyeball, heart to heart. That is, after all, the essence of the Bodhisattva Vow, right?

As folks met for Monday Morning Mindfulness at Community Yoga in my absence this week, I had the opportunity to explore Practice quite differently.  The setting was a Manhattan bound R train heading for the notorious confines of Port Authority.

At one point, a women, dirty, disheveled and smelling of urine, stumbled and fell across my lap.  Lost in a non-stop rant about everybody being "into her business",  she then recoiled from me, apparently aghast.   Regaining her balance, at least physically, she arose and then sat in the empty seat next to me.  All the while, she continued the agitated conversation with herself.

It took me a bit of time to move through the initial shock of the physical contact.

Watching feelings of repulsion and fear arise and pass, observing thoughts emerge and dissolve (Eeek. I'm freaking infected with something, etc.), I took a long, slow breath and began to relax.

After all, this was it--what my buddhy Peal might call "hard core Zen.  Here was another chance to do Tonglen on the front lines.  Absorbing what I could into the expansive space of  Heart on the in-breath, breathing out to extend my aspirations for peace and well-being--hers, mine, ours -- into the space within and beyond that subway car rattling through the darkness, I practiced.

Breathing in, breathing out.

At one point, as I began to allow my gaze to turn toward her, I noticed that her agitation increased immediately.  Her ire at other folks "being in her business" was, after all, the locus of her current hell.  I cut loose of any attempt to engage her more directly--and that's when the real work began for me.  I felt completely and utterly helpless.

As a child I witnessed my mother's struggle with the demons of her own psyche, up close and personal.  Diagnosed at times as a paranoid schizophrenic, at times as manic-depressive, she was in and out of mental institutions throughout my entire childhood.  Her struggle to navigate through life were a painful journey that, of course, affected me deeply.

Although I certainly enjoyed many perfect moments of childhood (wandering through fields for hours in awe of grasshoppers and butterflies, sitting on a hillside watching a rainbow emerge and dissolve, etc.), there were a lot of tough times.  I was often profoundly frightened and saddened as, again and again, my mother would disappear -- even when we were in the same room.

In the midst of all this, feelings of utter helplessness were not uncommon.  I ached to have Mom "re-appear"--and was powerless to bring that about.  On the R train that day,  could see those same feelings emerge--in spades--as I sat there that morning hurtling toward Port Authority.  Those feelings emerge now as I sit here at the laptop.

Breathing in.  Breathing out.
(READ MORE)

Though it Is Impossible

The first presentation of the Bodhisattva Vow that I came across was in Hey Beatnik! This is the Farm Book, a publication printed on the Farm, a huge, sprawling commune in Tennessee founded by Stephan Gaskin and his coterie of hippies which, at one point, numbered well over a 1600 folks.  In Gaskin's words the Vow is:

When I first read that, I was transfixed.  There didn't seem like anything else worth doing.

Although my current understanding and translation of the four vows has softened the edges of my youthful hippy bravado (who are we to attain Buddhahood and "save" the world? etc.), the essence of these four vows still form the bottom line for me--so much so that I don't really know whether I'm choosing this path or the path is choosing me.

Yet, over all these years,  it's highly possible that I've never allowed myself to fully appreciate the meaning of the word impossible.

A few weeks ago, during the MMM Circle, one of the participants expressed that she was having a particularly hard time of it. With a tear of emotional release running down her cheek, she exclaimed "nothing is working anymore."  Without a moment's hesitation, I pointed out a different way to look at it, what technique might be helpful, etc.

I then felt a dull "thud".  Quite understandably, she felt "talked at" rather than supported.

As I sit here now, it's not hard to connect the dots.  At a deep level, rather than allow myself to feel the depth of "helplessness", I shut down and went into my head where "answers" are easy.  Rather than acknowledge and feel the deep sadness of our human condition, the powerlessness that lays at the core of our ego, I was all too ready to tell her how to not feel!

So, the Practice deepens.  I'm increasingly curious to see how often I shut down in those places.  Although each line of the Bodhisattva Vow underscores the impossibility of ever really getting it all together, I think that my wounded Aries male-child patterns often propels me to immediately stress the positive actions to be taken as a way of shielding myself from the painful aspects of our shared predicament.

Although in my own mind I am seeking to do it right, to be helpful, I'm actually fleeing from feeling helpless. 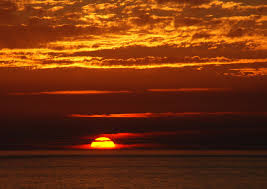 Sitting here, the wisdom of more deeply acknowledging the utter impossibility of accomplishing the vows I've taken becomes more and more apparent.  Allowing my heart to open to that is obviously an important edge of practice for me.

Yet, interestingly, that doesn't lessen the Commitment.  It still seems like the only thing worth doing.  Go figure!

Though it is impossible to achieve, I see that all I can do is to continue to lean into the feelings that emerge from Life as it is--and allow my Heart to feel its way toward freedom--for myself and all sentient beings.  All I can do is stay Present as best I can--and soften.

Maybe it's time to listen to Neil Young's "Helpless" and cry for awhile?)

Beautiful post Lance, and very in sync with Pema's "When Things Fall Apart." Interestingly, neither of you chose to follow up the instruction to stay present with helplessness with the (soothing!) reminder that everything is impermanent, that feelings of helplessness will arise and dissolve, that we won't ever be permanently stuck in feeling helpless. Possibly the two of you are being braver than me though-- willing to stay stuck in helplessness if that's what's continually arising.