"Though my heart burns like a glowing hot coal, my eyes are as cold as dead ashes"
--  Soyen Shaku, Roshi 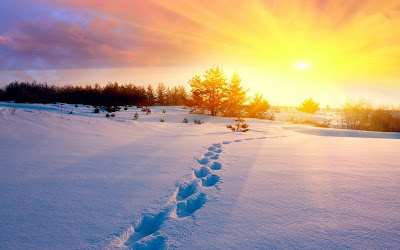 After two significant snowfalls this past week, storms that left huge mounds of plowed snow along the highways and byways of my life here in Massachusetts, it seems that Mother Nature is now moving to melt her way into spring.

If the National Weather Service's ten day crystal ball is to be believed, the daily high temperatures will be moving through the upper 40's into the 50's over the course of the next week.  Not bad for February, no?

Sitting here I could get lost in all sorts of thoughts about the weather.  Once again, we've had an unusually temperate winter.  Gazing at the melting white snowfields outside the window, my mind could create a long rant about the specter of global climate change in a heart beat.  (There certainly appears to be ample scientific evidence, after all.)

On the other hand, having seen lots of my friends suffer through some sort of respiratory bug again this week, I could narrow my horizons and spin off fantasies of personal climate change -- conjuring up dreams of moving my tail to a gentler and even warmer clime.

Yet, when I just return to my senses here and now; feeling the sensations  of my breath and body as I sit here, watching the tapestry of soft color outside the window, listening to the deep, deep silence occasionally augmented by the twitter of a bird, it is quite easy to let go of those particular story lines.  Just Sitting Still and letting the thoughts drift away, there is no problem.

The weather?  No big deal.  At the moment, it simply is.
(READ MORE)
No Big Deal?

In contemporary American Buddhism, the notion of "no big deal" seems to be a big deal actually.  In my first visit to The Farm* in the mid 1970's, I was introduced to this phrase in a way that spun my head around.  Apparently the Farm's Teacher, Stephan Gaskin, had picked up that term up from Suzuki Roshi at the San Francisco Zen Center.  (Chogyam Trungpa and his primary disciple Pema Chodron also teach about the importance of "no big deal.")

As was common practice, a small group of us were "rapping" in one of the single men's tents on the Farm that evening after a full day's work.  I had just poured my heart out about the utter shambles that had become my life in the past year (a marriage in disarray, a teaching career in question), when a clear-eyed young man calmly and kindly replied, "no big deal."

I was confounded. That the excruciating drama of my life could be perceived as "no big deal" was totally mind-blowing.  At first my stomach fell.   I felt "invalidated." But in the very next instant something shifted.  A space opened.  I saw clearly that the extreme drama I was experiencing wasn't solid.  A collection of thoughts and emotions,  it was largely self-created.  Rather than rub salt in my own wounds at that point, I saw clearly that I take even my own thoughts and feelings with a grain of salt.  That seemed to help.

Being a neophyte in the Practice, much of the time stumbling ahead without the support of a teacher or a sangha, it took me a couple of decades to get a better sense of what is actually involved with the terms "no big deal" and it's close cousin, "nothing special."  Like all too many meditators here in the West, I believed strongly that Spiritual Practice meant I should become"unattached", successfully transcending the "drama" of my life.

As the Practice matured, I came to see that "no big deal" and "nothing special" had been largely just intellectual understandings.  Although helpful at times, all to often these phrases had surfed along the crest of my rational mind.  Underneath that, there was a vortex of un-examined pain, fear and resentment resulting from an unfulfilled childhood desire to be loved and appreciated and acknowledged as very special, a big deal.   (I still "wipe out" readily on that one when I'm not paying attention.)

Here is where it gets even more interesting.

Yet, with this very next breath, I can also say, in all honesty, at this stage of the game it is also clearly Nothing Special, No Big Deal.

Stay tuned.  An answer may or may not emerge in the next post, a comment here on the blog--or, perhaps, in your very own next meditation.

*The Farm is a community in Tennessee.  I spent a couple of months there in the mid-70's over the course of two visits. At that point in time it numbered about 1700 people and was conceptualized as a Spiritual School with Stephan Gaskin as its Teacher.  Believing that interpersonal honesty augmented our awareness of our fundamental telepathic connection to one another, many hours were spent "working it out".

Inn Saei, can remind all of us of just where the big deal resides. The laughing Buddha IS expressive of such insight, intuitive wisdom, and knowing.
Wonderful blog on helping all get to the root of soul purpose through deep search motivation. Your help is appreciated, you are loved.

Thanks for the Laughing Buddha energy -- and the tip on Inn Saei!
One Love,
Lance