Two Out of the Three Ain't Bad

“Letting go gives us freedom, and freedom is the only condition for happiness.  If, in our heart, we still cling to anything - anger, anxiety, or possessions - we cannot be free.”
-- Thich Nhat Hanh

We are one blink of an eye away from being fully awake.”
― Pema Chödrön 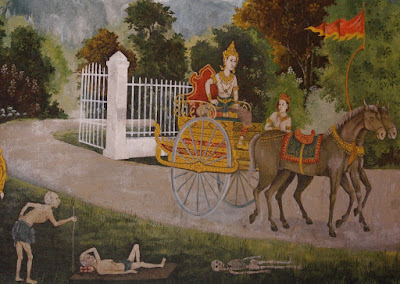 Being sick is no fun.

Last week was a doozy.  Rather than enjoy the delightful energy of three cherubic granddaughters for the entire five day visit to ChicagoLand, I spent two of those days sequestered in the basement, laying in a makeshift bed coughing and wheezing.

There was no doubt about it.  I was sick.

After a long travel day and two more solid days of rest here at hOMe, I was able to stay upright for several hours the next day with only occasional bouts of coughing.   Yet, even after another week, I'm not yet back to "normal".   At age 71, the realities of old age, illness and death that led young Siddhartha to turn his back on worldly power and pleasure to seek the Truth as a wandering ascetic are a part of my direct experience in many mind moments here again today.

Yet, although it's true that I'm an ailing old coot at the moment, I can say in all honesty: I'm just fine!  In this case, two out of three ain't bad.  It sure as hell beats hitting the Trifecta, right?  I'm still Alive!  As I sit here upright at the laptop, aware of my breathing, aware of my body, I feel deep gratitude and even a touch of joy as the hiss of tires on the rain slickened road outside the window emerges and dissolves into the vast stillness that embraces the magic of the present moment.

I blame that on Practice.  I wouldn't be here without it.

All the Difference in the World

For most of my life,  I've hated being sick.  As well as the discomfort of the various symptoms, I would invariably experience a lot of frustration and anger.  It was a double whammy.  Feeling lousy sucked.  Not being able to do what I wanted to do sucked.  I was miserable about feeling miserable.  Although my body needed rest, I couldn't.

Yet, as the years have rolled on and Practice has deepened, I can honestly say that things have shifted.  This time around, I've rested for days.  Although, admittedly, I relied on re-runs of Monk (a comedy-mystery series involving a detective with OCD named Adrian Monk, not an ordained monastic) to structure some of my time during the course the past week, I also spent a great deal of downtime just laying still and devoting my attention to breathing, being aware of the sensations of my body, and watching various thoughts come and go within the limitless space of awareness.

One day,  I even created my own sickday"retreat schedule." It began with my usual one hour morning of sitting meditation, then continued with alternating equal periods of Monk and laying down Meditation for the rest of the day, taking breaks to eat and nap, etc.   (I don't know, if any Zen master would have been pleased, but it worked just fine for me. )
(READ MORE)
Practice is What Practice Does
During the course of these "down" days, the simple "noting practice" emerged a number of times without any apparent conscious intention.  I have, after all, spend a lot of time over the course of the decades engaging in "formal practice".  Laying there at those moments, when I would become aware that thoughts were dominating my attention, the next thought would be the mental note"thinking"!  Sometimes I would then place more of my attention on my breathing, sometimes I would just open to whatever was next.  Mostly, though, during the course of "just laying there meditation", there was enough Ambient Awareness and ease to simply let the thoughts be -- and then not be.

There were, of course, some thoughts that evoked a different response, especially at the beginning of my subterranean stay in my son's basement.  At those times, it was helpful to briefly, yet carefully, examine and analyze the actual situation.  When I was honest with myself, there were actually ample and obvious advantages to an unplanned Day of Mindfulness or two in the midst of what can be a highly stressful visit.  In the past, my son and I have triggered one another quite deeply.

When the disadvantages and disappointments came to mind, there was, of course, some sadness to be experienced.  The loss of time with the Innocents, my son and his wife was certainly a loss.   Yet, just allowing myself to breath that feeling into my heart emerged naturally.  Then, as often happens these days, it was quite easy to "remind myself"of the simple truth that a primary reason for the existence and amplification of the experience of suffering is that of grasping for things to be different than they are.  More and more, what Buddhist teacher and psychotherapist Tara Brach characterizes as "Radical Acceptance"  doesn't seem so radical to me.   It just makes sense. 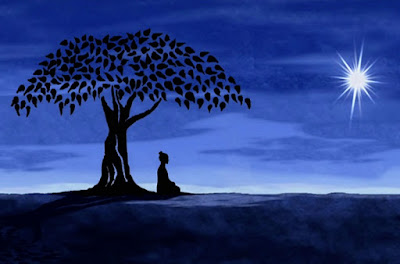 I can only blame Practice for this state of affairs.  To simply open to the moment just as it is works wonders. The Limitless Freedom that emerges from letting go of grasping for what "I want" or pushing away what "I don't want" is its own reward.  Nirvana is a really cool place to visit!*

*Living there is a bit more problematic for a number of reasons, but that's a tale for a different time.

Hey Lance,
Hope you're feeling better. Not to sound preachy (for your down time reaps its rewards) but caring for yourself is a high priority. Garlic cloves minced, apple cider vinegar pure water and raw honey will do wonders. Nature's antibiotic.

Hi Judith,
Thanks for Touching Base -- and thanks for the reminders. LOL I can use all the help I can get to stay on track.(I generally slice the garlic thinly and boil it down in water, drink the water and munch the garlic. What do ya do with the minced garlic?) Hope you are well.
One Love,
Lance
PS I seem to have turned the proverbial corner and am getting my physical energy back. Although you are "preaching to the choir" here, you didn't sound preachy.