The Sky's the Limit

“For things to reveal themselves to us, we need to be ready
to abandon our views about them.”
― Thich Nhat Hanh, Being Peace 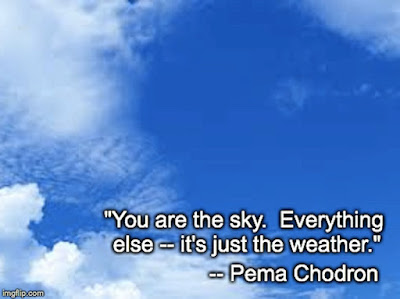 Yesterday morning, I had yet another occasion to thank my lucky stars for having stumbled into the Practice years ago.

I awoke from a bevy of Full Moon inspired, somewhat haunted, dreams feeling quite sad.  Thanks to the Practice, a few moments later, I was plucked from my homemade rowboat as it skimmed across the River Styx hellbound for Hades, and wisked to seventh heaven by a guardian angel sent by God.  No lie!

Lest I risk blowing any shred of credibility I may have garnered and/or being plucked from this perch at my favorite coffeehouse by burly men brandishing straight jackets, perhaps I better reword that.

When I first awoke on the embers of a dream to a gloomy, overcast morning yesterday, I was aware that I was feeling sad.  Having spent many hours Sitting Still Doing Nothing over the years, it seems that these days at least a modicum of Mindfulness is generally available.  So, I was aware that my first thought was "something's wrong".  This was quickly followed by the thought "I'm depressed", which evoked fear and fleeting memories drawn from earlier experiences of burn-out and despair.  The next thought was "these are just thoughts."

I then shifted the focus of my attention to what I was hearing.  A bird outside the window began to sing.  It was Beautiful.  My mood lifted immediately.

I can still thank my lucky stars, right?

(Although I still may have not recouped any semblance of credibility, the burly guys just shrugged and left.)
(READ MORE)
Thanking My Lucky Stars
Although some folks believe that we actively choose our incarnation, I feel like it was just sheer Grace that had me show up just in time to catch the Collective Kensho of the 60's as a young man.  It seems to "me" at this moment that the notion of reincarnation is an attempt to conceptualize the experience of the ever-present arising and passing away of all phenomena in a way that still lists us as members of the cast in the Grand Screenplay of Being.

At this point, I'm not so invested in seeing my name scrolling through the credits.

Although it seems clear that patterns of energy ripple onwards throughout eternity transcending birth and death, as best I see it -- and I've spent countless hours in meditation over the years looking carefully --there really isn't any lasting, permanent "I" that is somehow fundamentally separate and distinct over time from the rest of the Universal Flow of Energy that exists throughout time and space.

In fact, most of the suffering that we experience is directly related to our own over-identification with the various story lines we've adopted to describe ourselves over the years.   The primary culprit, it seems to me, is the belief that there is a is a static, solid, essential "I" that exists in and of itself.  Given that we grew up in a pretty neurotic society, this particular storyline creates a "reality" that is often heavy, ponderous. and claustrophobic.  Once you see through that one to experience your True Nature, the line between the mundane and the Sacred dissolves.  You realize the sky's the limit.  Aware of the Ongoing Miracle, you can let go and lighten up. 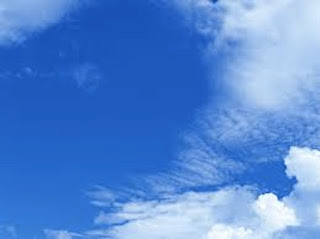 At least that's my story and I'm sticking to it -- or not.  If I end up at the Pearly Gates with egg all over my face, so be it.

But don't take my word for it.  See for yourself.

Okay. The Lance that you were at, say, age seven is not the Lance you were at age, 21, 40, etc. Physically speaking, all our cells change every 11 months. So there is no static I. That's the good news. Life is change. And I'm all in for that. Welcome it. Count on it.
It is good to change your thoughts and your mood lifts. It's spectacular, magic. It can be done. And yes, it does take practice.

Sounds about right to me. In fact, looked at closely, the "me" is constantly changing. We shimmer like the play of sunlight on the ripples of a stream. The Tao? Well that's another matter, no? _ /\ _