To this day, this period of intensive practice is widespread in Theravadan Buddhism, and is observed in various forms in Tibetan Buddhism and some traditions of Zen as well.  Here in the US, where hot summer weather is more problematic than monsoons, it often seems to have evolved into periods of intensive practice that occur in the Fall and/or the Spring.

At Insight Meditation Society in Barre, MA, the Rain's Retreat has become the 3 Month Course, a meditation intensive that begins in September each year.  One year, I joined that retreat for the entire month of October.
(READ MORE)
At Insight Meditation Society, this commitment meant existing in silence for that 30 days, and meditating in one form or the other from 5:30 am until 10:00 pm each day.  Except for listening to an evening dharma talk, sometimes receiving a few words of instruction during a period of work, and engaging in a brief interview with a teacher every few days, the entire world was wordless.  Even engaging in reading was highly discouraged.   An inveterate bookworm, this made me squirm, but proved to be a powerful support for dissipating the momentum of habitual thought. 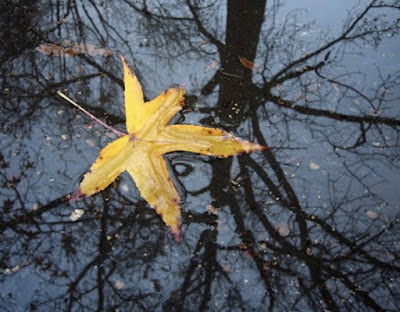 It makes me shut up -- and pay even closer attention to the Silence!
Posted by Lance Smith at 6:24 PM

Aah! Yes!
Silence seems to be the mode for this season. A time to listen, to learn, to realize, to be calm in,.. all that it is!
It is that part of the circle of life being played out in a array of beauty to behold, drink in, and feel the vibration of all that is 'letting go' to creation. It in itself dictates quiet, respect, peace, understanding, and joy.
If you have eyes, you can see it's brilliance , if only ears, you will hear it's many tones, to stand in it's midst,you can feel it's passing in the changing winds against your body, breathe in it's pungent fragrance knowing this is perfection,all while hearing God's words; "Come Dance With Me!"
Yes, I feel autumn speaks volumes to the soul and we need only be silent to absorb it into ourselves.
Thanks for the reminder.

Beautifully expressed. Blessings on your Dance through Autumn. <3