On a Wing and a Prayer

``Do not be afraid," the Voice called to him. ``Hang on to the wind and trust!"
-- from "Story of the Jumping Mouse",
in Seven Arrows by Hyemeyohsts Storm 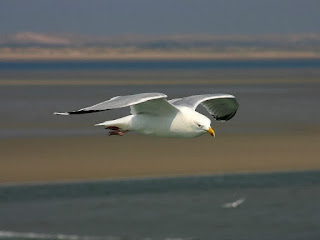 Back in 1970, my kid brother David, who was in many ways my Guru long before I knew much about gurus and the Practice, sent me a handwritten copy of the "Story of Jumping Mouse".  A denizen of Haight-Ashbury at the time, David had come across this Native American allegory before it appeared in Hyemeyohsts Storm's Seven Arrows in 1972.

I was transfixed.  It was one of those stories.  It resonated deeply with the Heart of the Matter for me. Stirred to the core, my heart chakra opened once again through a torrent of tears.  (Those were the days, huh.)

A tale of the Spiritual Quest, "Story of Jumping Mouse" traces the journey of a simple Mouse who heard something one day, a faint roaring sound that the others didn't appear to hear amidst the scramble of their day to day existence.   His Essential Curiosity stirred, this mouse summoned up the courage to leave the safety of his normal life to discover a world of great beauty and magic.  With the help and guidance of other creatures, through repeated acts of courage and sacrifice, and the willingness to serve others again and again, he developed his Medicine as Jumping Mouse.  In the end, (or perhaps, the beginning), the Jumping Mouse became Eagle.

Although, I probably personally identify more with the Jonathan Livingstone Seagull (another spiritual allegory of the early 1970's) than with an Eagle, I think that the symbol of flight captures something essential about the Spiritual Path.  Years ago, I read of a society in the South Pacific where the children were taught to fly in their dreams as the main spiritual practice. Carl Jung believed that flying dreams symbolized the basic human desire for liberation. It seems pretty deep and universal.

So what does Sitting have to do with Flying?
(CONTINUED)
It seems to me that the more we are grounded in the Practice, the more we appear able to soar into our lives with a sense of freedom and ease.

Through Mindfulness Meditation, our willingness and ability to Sit Still to face --and embrace -- every aspect of our conditioning, the "stuff" that keeps us landlocked increasingly melts away.  As the Practice deepens a sense of spaciousnesss increasingly emerges, and we are able to turn toward the fear that naturally arises with greater ease and warmth.  Then, at a certain point, we see for ourselves the fluid and evanescent reality that flows through our own experience. Like the paradox of a Zen Koan, our increasing capacity to actually feel the utter groundlessness that exists within the fabric of Life itself, enables us to gain solid enough footing to launch ourselves into the next moment wihout fear or grasping --free as a bird. 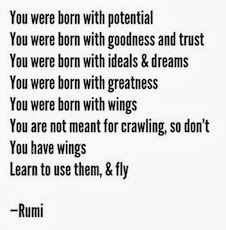 Although any word picture of Shunyata, the emptiness asserted in Buddhism, is essentially limited, the clear blue sky is one image that is sometimes used.  In the Tibetan Dzogchen, one of the meditative practices actually involves gazing at the sky as you visualize dissolving into its expanse on the outbreath. Although I've only dabbled with this particular practice over the years -- usually sitting outside at dawn or sunset -- Sitting Still at those times certainly seemed to be have provided some majestically beautiful moments.

The truth of the matter, though, is that a similar experience can emerge in the very next moment -- wherever you are.  Being Present, you feel the Presence.