Hopefully, I even learned a thing or two.
(READ MORE)
What I discovered, once again, is how deeply I can engage life as a "battle".  As I explored the fabric of thoughts and feelings that emerged over the course of several days, on and off the zafu, I saw myself toppled from my own comfortable notions of being a "righteous warrior" to be thrown into the abyss of experiencing myself as "abused and abandoned".  It was a wild ride.

Thankfully, a lifestyle that includes periods of daily Meditation and Study gave me ample space and time to breath some ease into the cluster of intense, darker energies that occasionally  returned to draw my attention.  Although it took some time and effort over the course of a few days to transmute the energy into a bit of insight and compassion, this morning I again realized that beneath the clouds of self-absorbed thoughts and feelings, there is always an essential choice to be made.   (Spacing out to a delightful comedy last night on Netflix probably helped, too. LOL)

Jesus and Buddha Agreed: Love is the Answer

You don't have to be a great scriptural scholar to realize that both Jesus and Buddha taught that undue attention to our own personal self-centered concerns just doesn't cut it.  Jesus's famous guidance in the Sermon on the Mount to "turn the other cheek" and "love your enemies" is echoed in the teachings of the Buddha -- and not just in the Mahayana tradition where the teachings tend to idolize the Bodhisattva (one who is willing to forestall enlightenment in order to serve others).   In fact, just three verses into the Dhammapada, one of the earliest codifications of the words of Buddha found in the Pali Canon of the Theravada, we read that just the thoughts "He abused me, he struck me, he overpowered me, he robbed me" will always serve to foster hatred and make matters worse! 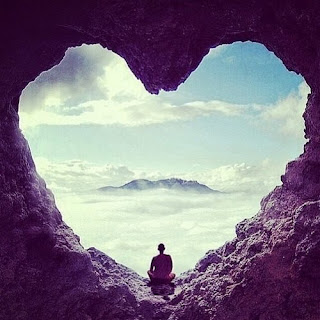 Yet, this morning I realized clearly that this is exactly where I had gone -- again.  At a certain point I caught myself mid-thought, once again revving up on what had been "done to me", what I wasn't getting from my friend.  I just let that thought go and took a deep, conscious breath.  What then emerged from my heart of hearts was the intention to focus instead on what I could do to ease her burden at this point.  The choice made, my heart glowed and the world brightened instantaneously.

My energy and spirits have cycled upwards ever since.
Posted by Lance Smith at 7:18 PM

Wouldn't it be great if were all cats but with the insight of humans! If that were the case it wouldn't take long to completely let go of our compulsive sense of self absorption. We'd have the knowledge that the compulsion always leads to upchucking our fur ball of self centeredness. ;)