"When you see ordinary situations with extraordinary insight,
it is like discovering a jewel in rubbish."
-- Chogyam Trungpa,
"Work", The Myth of Freedom and the Way of Meditation

“There is no enlightenment outside of daily life.”
― Thich Nhat Hanh

I have been involved with Community Yoga and Wellness Center here in Greenfield, a small town in western Massachusetts, since 2011.  I was 65 years old when I first walked through the doors, having just competed a six week cardiac rehab program.

I was grateful to be alive.

Although a regular meditation Practice had been part of my life for decades at that point, my own genetic programming, inconsistent attention to diet, and years of smoking, had set me up for acquiring the same form of coronary artery disease that had ended my father's life at age 61 and his father's life at age 47.  Although I never had a heart attack, by the time of the procedure, the major artery that feeds the major pumping chamber of my heart was 90% blocked!

It's clear.  Without the wonders of modern science and Practice, I would not be sitting here at this aging Mac laptop, in reasonably good shape for an old coot.  I'd be ashes spread to the four winds.

If I try to connect the dots of my own spiritual journey as a child of the 60's, it was the inspired Christianity of the Civil Rights Movement, embodied in the life and death of Dr. Martin Luther King, Jr., that had led me to explore the life and writings of Mahatma Gandhi.  The engaged spirituality of Gandhi's Satyagraha, and the vibrant example of his Life and Practice had then drawn me toward the exploration of Hinduism.  Like many others, Hatha Yoga became the Gateway to developing a Spiritual Practice.

The world of Hatha Yoga in the US was different back then.

In that era, yoga studios were far and few between, mostly in a few big cities.  There certainly weren't any in the fringe suburbs of ChicagoLand.  My first Teachings and Teachers were the books of Richard Hittleman and Swami Sivananda, then Lilias Folan of PBS's "Lilias, Yoga, and You" delivered on an 18" black and white television. In those days, Yoga wasn't primarily presented as an exercise and stress reduction tool.  It was embraced as a spiritual practice, a path leading to enlightenment.

As it was, my kid brother David Little ( a healer, who has lived in India for the past 40 years), gave me my first "hands on" instruction in yoga (as well as certain medicinal herbs and compounds) during my visit to Marin County is 1970.  (He had recently emigrated north from this place known as Haight- Ashbury).  His lessons on asana and pranayama were inspirational.  Within the next year or so, Ram Dass's classic Be Here Now, provided continued inspiration, and over the next couple of decades Yoga became part of my life. I found a partner who practiced yoga, then classes with the Yoga Meditation Society of Madison, WI (affiliated with Swami Rama's Himalayan Institute of Swami Rama).  After a decade of Practice, I taught classes there in the 1980s.

By 2011, all that was ancient history.  Although I occasionally stretched out, my Hatha practice was non-existent.  By then, the meditation practices of Buddhism had become central to my life.  Other aspects of my life had become more sedentary as well.  Contemplating the situation deeply, knowing how close I had come to the final curtain. I decided that I wanted to reclaim a hatha yoga practice.  The serendipitous synchronicity that emerged in the wake of that decision was grand.

At the end of the first class I attended, part of a noontime series offered by the local food coop, that day's teacher, Jenny Chapin, announced that she was looking for a someone to barter custodial duties for yoga classes at Community Yoga and Wellness Center, the studio she owned and directed.

"What a great idea," I thought.  Retired, I had much more time than money. Looking to regain a serious practice and more physical lifestyle, I was immediately on my feet and headed in her direction. The brief discussion with Jenny was quite positive.  I started the next day.

Today, although my role is now "Coordinator of the Caretaking Crew," I found myself with mop in hand, dancing across the wooden floors of the studio's entryway landing.  Due to transitions in the Crew and an extremely snowy winter, I was again, "hands on." An alchemist, I was transmuting mud, melted snow, sand, and salt into gleaming hardwood floors again. For the first time in a while, I had the chance to personally participate in this high form of magic at the studio.

I'm not chomping at the bit to find a replacement.
(READ MORE)
Gold Is Not All That Glitters 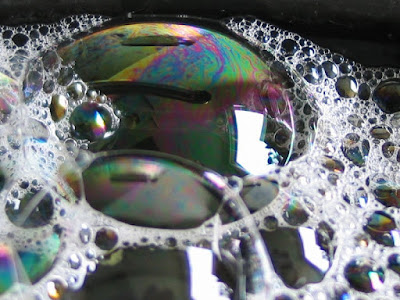 Years ago, I was quite struck by a suggestion in Ram Dass's classic, Be Here Now.  In the third section of the book, "Cookbook for a Sacred Life," he suggested that a yogi could take a regular mundane activity, especially one that was really disliked,  and turn it into a form of active meditation.  At that point, I chose washing the dishes, took a deep breath -- and headed out to the kitchen to face the unsightly stack that had emerged over the course of the past few days.  (I really hated washing dishes. LOL)

Letting go of all the mental chatter and emotional grey clouds and focusing on the actual experience of the moment, dishwashing not only became tolerable, it became the keys to the kingdom.  Getting out of my head and coming to my senses, the warmth of the water on my skin was delicious.  The tactile sensations of plates becoming clean and shiny, smooth to the touch, was not only enjoyable, it was deeply satisfying.  The sunshine streaming through the window was lacing the running water with diamonds and there were emeralds, rubies, and sapphires gleaming in the soap bubbles.  A cardinal sang outside the window.

I suppose there's lots not to like -- but only if you buy into society's prevailing attitude toward manual labor!  Unfortunately, many of us made that purchase long ago.  We had no idea what the price was going to be, and there was hell to pay.  Hours and hours would be spent hating what we were doing!

Considered lowly, even demeaning, many of the necessary activities of day-to-day life are often avoided, then raced through haphazardly while our minds race elsewhere.  Programmed in a hierarchical society to feed our egos through acquiring status, these activities somehow seem beneath us or are experienced as heinous tasks forced upon us by our parents.  Conflicted, we feel like we have better things to do. Yet here we are.  Life as it is.  Most of us have to clean, do dishes and laundry, and (shudder) take out the garbage we've created.

Although housekeepers and janitors probably aren't going to make it into Who's Who in today's world, the duties they perform are the warp and woof of the Grand Tapestry of Real Life.  As such, these activities are the perfect ground for Mindfulness Practice -- and a staple of Zen Training throughout history.  When approached as Practice, with the physical and sensory experience of the activity becoming the object of meditation, we can refine our attention and explore the nature of our own mind.  In the process, we can transform a dirty bathroom into the Pure Land of Amitabha Buddha.

Like any form of Practice, with time and careful attention, something shifts.  Letting the thoughts and feelings come and go without paying them undue attention, we come to our senses.  Our senses become a connection to the limitless grandeur of this limitless universe. Mindful of the movement of our body, the tactile sensations we are experiencing, and the sights, sounds and odors of the task at hand, and opening to the Limitless Awareness that is always present, the miraculous nature of life becomes self-evident.

My second encounter with my first embodied Zen teacher, Reverend Gyomay Kubose came on the morning of the weekend Sesshin scheduled to begin that evening.  I had spent the night sleeping on the floor of the educational wing of the Chicago Buddhist Temple, having traveled down from a small town in Kenosha County, Wisconsin.  Although I had consumed books and books of teachings by then, and meditated (or thought I did) for several years, I had never been face to face with an actual meditation teacher.

The first encounter with Reverend Kubose had occurred the night before.  He had graciously welcomed me at the door of his home -- a full day before the start of Sesshin.  Adrift in stories of how it was done in medieval Japan, I didn't even think of calling ahead.  In a classic example of youthful cluelessness, I just showed up.   (When Sensei's wife poked her head into the kitchen moments later, she just rolled her eyes and left. LOL)  After making sure that this unexpected visitor wasn't hungry,  this kind and gentle man then walked me to the "Sunday school classroom" where I was to lay out my sleeping bag.  He then told me to meet him in the Zendo the next morning.

Used to sleeping bags and floors at that time in my life, I slept soundly.


When I arrived at the entryway to Zendo the next day, Sensei was dry-mopping its polished wooden floors as sunlight streamed through the windows.  In his early 70s at the time, his gait was fluid and steady, graceful.  His demeanor was calm and focused, though he noticed me almost immediately.  He then bowed, and with a gesture indicated I should bow as I entered the zendo.  I did.

Me being me, I immediately asked if i could help, extending my hands to take the handle of the mop.  Instead he asked me to follow him over to a table in a side room.  There lay an assortment of flowers and a vase.  With a minimum of instruction he asked me to arrange the flowers and place the vase on the altar when I had finished. He then turned and began mopping once again.

I'm in tears here.  I, once again, am grateful for the depth of his gift to me that morning.

Nice you really had the opportunity to wash dishes as your way to enlightenment.
Did you wash enough to get there?
I'd only heard of this technique, but you really did it!

Hey Don
IMHO, enlightenment isn't a destination. As far as I can see, It has no beginning, no end. It's a really a verb, not a noun and is always present -- although we may not realize it. I like Stephen Levine's notion that "Lightening up" was a better way to talk about it.

Later, 'gator. I got dishes to wash.
One Love,
Lance


It gets the job done, right? I like the title to Jack Kornfeld's new book, "First Enlightenment, Then the Dishes." Although if I wanna quibble, I'd have to make the assertion that Enlightenment isn't a distinct separate "moment" or "experience" separate from eternity/infinity. Enlightenment transcends the distinctions made by our conceptual apparatus. I'd maybe throw a new twist on the old maxim. How about:

Thanks for your Presence,Sister.
One Love,
Lance