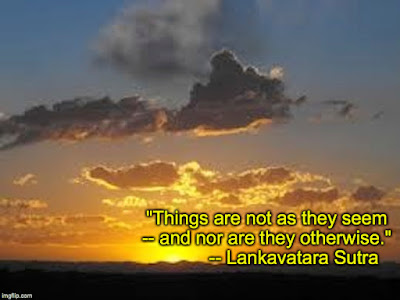 I'm awake at 4:30 a.m. and the birds are beginning to stir in the pre-dawn balmy air outside the window.  Maybe I can catch my first sunrise of the season.

Calling that moment "sunrise" is, of course, a classic case of our human propensity to conceptualize things from our  limited perspective.  That isn't really a problem.  The problem is that we then tend to grasp onto the words that describe those relative positions as the absolute truth.  This leads to a whole lot of delusion and suffering.

If I choose to believe what I learned back in science class in elementary school -- and in this case I do because it seems that we have actually had some folks brave enough (or crazy enough, perhaps) to place themselves on top of a huge tin can full of explosive chemicals to be then catapulted high enough into the sky to look over their shoulders and take snapshots of our situation from a different perspective -- the sun isn't actually rising at all.  It's got a different set of motions through space.

It seems to me that we could just as readily call that magic moment of cosmic peek a boo "earth-fall"as the horizon "drops" down to expose the sun which is maintaining pretty much it's same relative position to earth.  Of course, that certainly doesn't seem nearly as positive and promising as Sunrise.
(READ MORE)
I Feel the Earth Move Under My Feet

So, if I can believe the pictures that those sky jockey's took, what I learned in school was right.  Even before the advent of space travel (on the material plane), some guys with gizmos like telescopes and slide rules, and minds that could create mathematical models out of thin air had figured it out -- without being shot out of a freakin' cannon. The earth is, indeed, a rather round object spinning like a top at 1000 mph as it races along at about 67,000 mph along its orbit around the sun in an incredibly vast sea of space and other stuff. 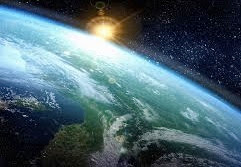 Nowadays, as a Practice of decades continue to deepen, I'm grateful that a palpable sense of clear expansiveness is more readily accessible no matter what fills my visual field.   I'm ever grateful for the Teachers and Teachings.
Posted by Lance Smith at 10:51 AM

I get quesy with that 1000 mph sensation too.
I like your playful way of sharing your pt of view...and the WHACK! seems hysterically funny from the ease & quiet safety from the chair I now sit. Sometimes a pop up picture appears in my minds eye with audio of the Dalai Lama smiling and laughing, of Echardt Tolle’s laughter surfacing through him like it does & also Pema Chodron. I too feel that delicious giggle at times and I’m grateful for this....those unannounced whacks can be so challenging. :)

Hey Sister K, thanks for chiming in. Thanks for sharing the sentiments and images. As the world spins and races through space, I have a renewed wonder for the Earth's gravity and the vastness of our Heart/Mind Connection the Infinite Space. Embracing both bring me a great sense of gratitude and peace.

And yes, I enjoy that emergence of the Teachers and Teachings in those mind moments as well as they emerge and dissolve.

Then, at times, there are less welcome characters as well. One of the Lojong Practices addresses the "unannounced whacks" of the more challenging or disturbing emotional energies that may suddenly emerge. In the Tibetan tradition they speak of the "dons", which are the less than pleasant "spirits" (evidently remnants of the pre-Buddhist Bon religion). We are advised to "make offerings" to them as well, valuing there ability to shake our complacency and instill deeper humility and compassion.

Again, thanks for your comments here and elsewhere.
One Love,
Lance
<3

Miss u tina and hunter