All I could do was grin.  Eight of us had gathered at our Mindfulness Circle
to meditate and then explore the second slogan of the Lojong Trainings: "Regard All Dharmas As Dreams".

Although all assembled, myself included, were essentially beginners in the study of these Teachings, I imagine the energetic, sincere, often profound, sometimes amusing, discussion that emerged could have been a conversation among senior monks somewhere.


Although a couple of folks, perhaps quite aware of the limitations, perhaps even the inadvisability, of placing our collective attention on words and discursive thought didn't participate, the rest of us jumped right in.

As I understood it, what materialized was no more, no less than a conversation about the true nature of reality and our individual ability to actually experience the truth of our existence. Although none of us is really a Buddhist scholar and some of us may not even consider ourselves Buddhists with a capital B,  assertions about Emptiness, Impermanence, Non-Self, Co-dependent Origination, Interdependence and Oneness, were offered and explored,  dissected and re-assembled.

At several points the fundamentals of Zen were touched on as phrases were turned, then turned on their heads without altering the meaning at all!  Even when there was apparent "disagreement" with a presentation or mode of presentation, it still felt like we were all basically on the same page.  There was an underlying fabric of good will and good heart all the while.  It was an absolute hoot -- relatively speaking.

Gaining a "solid grasp of reality" is often considered to be one of the important aspects of growing up in
(READ MORE)
contemporary society.  The message is pretty pervasive.  We are encouraged to get real, to be "realistic" as we establish ourselves in the world.  John Lennon's imaginings notwithstanding, being called  a "dreamer" usually isn't a cause for pride. * 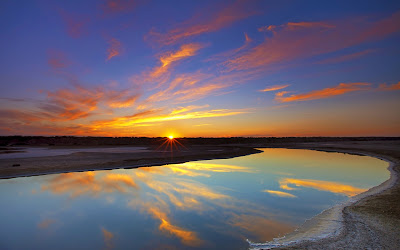 As Practice develops and our ability to see and accept this matures,  an awareness of something else also emerges.  As we merrily row our boats gently down the stream sensing that  "life is but a dream",  as we increasingly relax into the fullness of each moment, we may just notice that the vast blue sky stretching overhead is clearly reflected in that stream.

At a certain point we may then see for ourselves that the stream is reflected in that sky as well.  So is everything else -- including ourselves.

At that point, we may feel free enough to relax, lighten up, and really live the dream.

This ties in with something I have observed regarding the often weaponised phrase "let's be realistic"... it usually prefaces a rationalisation of some sort - roughly translated as "please agree to accept for yourself the same limitations I have accepted for myself", to which the response can only ever be, respectfully, absolutely not