Wherever Two or Three of You Are Gathered

"Everyone has the seed of Buddhanature within them."
--Thich Nhat Hanh 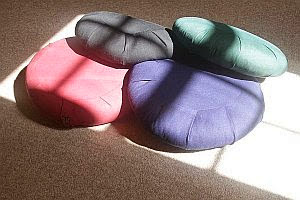 I've felt it distinctly.  I've heard it from lots of folks in the Mindfulness Circles over the years, too.

Meditating with other people is different than meditating alone.

After all, at a fundamental level, we are not inherently isolated individuals, separated from one another (and the rest of the universe) by some impenetrable barrier.  As Alan Watts wrote years ago, we are not merely,"skin encapsulated egos."

As best I can sense it, we are, each of us, a focal point of energy in a interconnected web of energy that is inseparable from what some folks refer to as God.  Although I may not feel the truth of that in each and every moment, I've experienced this enough to know it to be the Real Deal. We are not just in this together.  We ARE this together.

So, sitting together in meditation will actually feel different.  Especially when we then take time to compare notes on our lives and meditation practice.  As we learn to open our hearts and minds to one another, to listen to one another mindfully, without judgment, we can actually feel our connection more readily.

Although the existence of a spiritual dimension to reality has been proclaimed by mystics and spiritual teachers throughout the ages, we live in a society where materialism has dominated the cultural landscape for centuries.  The entire thrust of our conditioning has operated to disconnect us from that spiritual dimension.  This has happened for generations.  Yet, with commitment, time, energy -- and grace -- we can return to our True Nature as spiritual beings.

With Practice, we can get real.  We can access our heart's boundless wisdom.  In our heart of hearts, we can experience the healing power of Connection -- to ourselves, to one another, and to the infinite One Love that we emerge from and return to each moment.

In 2012, I was asked to teach a meditation class at a local yoga studio.  I replied that I would gladly facilitate a weekly group meditation practice -- and do it for free.  Retired, living on a small fixed income, I would barter as the studio caretaker for use of the space as I had done in order to take classes there.

Having begun the exploration of yoga and meditation as a college senior in 1969, having practiced with a number of major (and not so major) teachers over the years, I felt quite deeply that the hierarchical nature of traditional institutional Buddhism was not unlike that of the other major world's religions.  The patriarchal structure that institutionalized power over rather than power among members of a community, was deeply problematic.  It was clear to me that authoritarian structures serve to disempower human beings, and lead to subtle, and not so subtle, abuse of the human spirit.  I'd seen that with my own eyes, felt it in my own body.

I'd also seen that the commercialization of spiritual practice in our society, like all aspects of life in a capitalist society, operates to prevent access to people of limited economic resources.   The so-called New Age Spirituality that blossomed during my lifetime was nothing new.  A whole lot of money was changing hands.  The deep healing that is available through a committed meditation practice and alternative forms of healing flowed primarily through an economically privileged, mostly white, sector of our society.  American Buddhism had become the Upper Middle Way.

As a person who had grown up in poverty, who had spent time in foster care as a kid and  experienced homelessness as an adult, I wasn't comfortable with putting a price tag on human liberation.  The healing I'd receive through Practice was priceless.  I didn't want to capitalize on it.
(READ MORE)
Then and Now.

So Monday Morning Mindfulness began.  It was a DIY moment. As Thich Nhat Hanh had suggested, I started a sangha.

Although I knew I had something to share (over four decades of meditation and spiritual geekdom at that point,) I had seen clearly that Buddhanature is universal.  It was clear to me that we each have the onboard equipment to discern the Truth.  I could see that in everyone's eyes.  I'd found deep wisdom and compassion out on the streets among the homeless, sitting around a campfire with Native American activists, in the smile of a child.  It was not just available in the high seat at the front of a meditation hall.

I wanted to do this differently.

Although I'd take responsibility for facilitating a process, I believed that what was needed was to create a setting for the shared exploration of our lives and spiritual practice.  Holding space for one another in a circle of peers, I trusted that wisdom and compassion will arise.  Speaking from the heart and listening with the heart, the Truth emerges from our own lived experience. We each become the teacher and the teachings.

Although I'd spent most my time with Buddhist teachers, teachings, and practices over the years, I knew this wouldn't be a Buddhist group.  I'd also practiced and worshiped and studied with Hindus, Christians, Native Americans, Sufis, Modern Wiccans, and Taoists.  It was clear to me that there was no "one size fits all" spirituality.  As one tradition proclaims: Truth is One, paths are many.  The group would be open to all.

Within the first year, MMM expanded to several Mindfulness Circles a week as members of the Recovery Learning Community, then the Recover Project asked me facilitate a weekly group.  I was then asked to organize a one day retreat, then to offer it monthly.  This became Be Still and Know: An Interfaith Day of Mindfulness.  It has continued for seven years.

Now, since more support was requested within the social isolation of the COVID19 pandemic, we are meeting on the web five days a week.  Tomorrow, June 21,  will be our fourth Be Still and Know on Zoom.  Through it all, I continue to be amazed by the wisdom, compassion, and depth of connection that emerges, again and again, as we gather to share our lives and our practice. 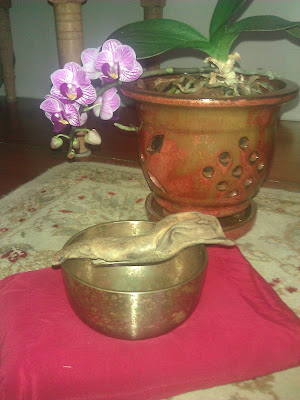 Sitting here at this very moment with sunshine and a neighbor's West African music streaming through the window, I am struck with a sense of awe and a feeling of gratitude.  Eight times a week I get to share my life and spiritual practice with a small community of kindred spirits making the effort to live lives of compassion and wisdom.  In a world where many people feel disconnected -- even before COVID19 --  I feel blessed.

I have the opportunity to meet regularly with other human beings committed to the Practice.  Whether we are sharing the collective container of our silence in meditation practice (some folks join us just for that,) or attempting to be real with one another during  Heart Council Practice,  I am aware of how rare and precious this is.

Showing up for our life with an open heart takes courage. Being a kind, compassionate, and clear-minded human being is a daunting proposition.  Having friends who are willing to meet regularly to share the journey makes it doable.

(If you want to see what we've come up for an agenda, or bounce ideas around about how to structure your own group, write me at mondaymorningmindfulness@gmail.com)
Posted by Lance Smith at 6:24 PM

For who you are and what you do.

Having lived at Sirius Community and other "spiritual communities," I'd like to share that in most cases, I do not like meditating with others. It usually feels to me like everyone goes to different places. Sort of like ok, let's all be together and shut up for a while.

Annual National Rainbow Gatherings are different for me as I think that when thousands meditate in the cathedral of nature without a guru or other controls, that this is a minor miracle that might be part of what holds our world together for yet another year.

I feel fortunate to have met you at Recovery Learning, and unlike most group medication experiences, find myself actually enjoying it.