"May the frightened cease to be afraid
And those bound be freed;
May the powerless find power,
And may the people think of benefiting one another”
― Shantideva, The Way of the Bodhisattva
"Taking the bodhisattva vow implies that instead of holding our own individual territory and defending it tooth and nail, we become open to the world that we are living in. It means we are willing to take on greater responsibility,
immense responsibility. "
-- Chögyam Trungpa 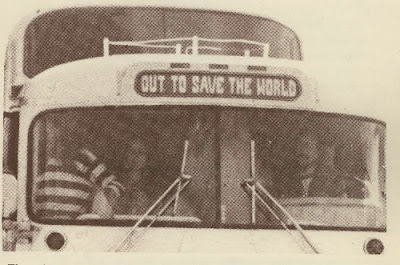 Although the teachings of Pema Chodron have had a profound influence in my own practice for the past fifteen years, I'd have to say that Stephen Gaskin is my "root guru".

I came of age in the late sixties.  The Spirit was on the land.  More than anyone else, Stephen Gaskin seemed to capture the essence of the Collective Kensho that occurred during era.  A marine veteran of the Korean War who went on to become  an English instructor at San Francisco State, he transformed the energy of tripping with friends in Haight-Ashbury into a bustling community in Tennessee that at one point included about 1700 people.    (He also was a central part of an inexplicable occurrence that touched my life the week after he died in 2014.  (See Your Courtesy Wake Up Call: Lighten Up!, July 12, 2014)

When I first saw"Out to Save the World"boldly displayed in the destination window of Gaskin's Greyhound Scenicruiser, it brought a grin to my face -- and stirred something deep in my heart.  I thought, "Of course.  What else is there to do?"

As I reflect on it here at age 74, I sense that I had already been propelled in that direction by a series of events in my youth.  In the midst of the trauma and pain of a chaotic childhood, I had been touched deeply by the kindness and courage of "strangers" more than once.  There was a type of energy in those interactions that was palpable.  I felt it.

Then, one day in eighth grade during recess, I discovered something about the nature of reality that still rings true.  Standing alone, once again the new kid in school (I had gone to ten different schools by then), I was watching the schoolyard interactions on a surrealistically gorgeous autumn day.  A dance of color and sound, Life played out in front of me like a movie.  Some kids were being kind.  Others were not.  Some kids appeared to be having fun.  Others were not.  At a certain point  -- Zap!  I got it.  It was obvious.  Through our attitudes and actions, we humanoids are individually and collectively creating the world we experience each moment!

Seeing that clearly, the key to life seemed like a no-brainer.  What Jesus was preaching in the Bible was just plain, common sense.  (It would be another ten years before I read that Buddha had a similar take on things.) As you sew, so shall you reap.  If we would just get our act together and love one another, the Kingdom of Heaven was at hand.

Of course, I quickly learned that a lot of folks hadn't quite seen that yet.  I also saw that consistently being kind was not all that easy.  Fear and doubt and confusion were powerful forces. It was going to take some serious work to pull it off.  It would take a real commitment.

Stephen Gaskin brought that point home as I discovered his teachings in my mid-20's. Although I'd read about the ideal of the Bodhisattva in Mahayana Buddhism, I hadn't actually seen the four fold Bodhisattva Vows until I read Gaskin's rendering of it in Hey Beatnik*:


I got goosebumps when I read that.

Although I was a couple years away from sitting with my first embodied Zen teacher, those four lines seemed to capture the essence of what I felt my life to be about, and it pointed out the work to be done.  A few years later, when I discovered the Mahayana Buddhist teaching that there could be no final and perfect enlightenment until everyone was enlightened, I broke into tears.  It just made sense.  Like many of us back in the day, I'd already peaked out (even without LSD) to experience our Essential Oneness.  It just made sense that a Bodhisattva wouldn't punch out and go home to Buddhahood until everyone was covered.

Rather than me taking the Bodhisattva Vow at that point, the Vow took me.  Looking at the condition of the world around me, I couldn't see anything more worth doing then to get my act together and try to help out.  Now, fifty some odd years later, it seems even more important as our species continues to careen toward disaster.
(READ MORE)

Over the years, I came to understand that the four commitments of the Bodhisattva Vow, like any of the precepts in the Buddhist traditions, aren't to be seen as strict commandments chiseled in stone. These aspirations are guidelines for practice, to be approached with gentle, patient, diligence.

For me, Bodhisattva Practice has involved an ever-deepening awareness of my own conditioning and patterns, noticing the many ways that I can close my heart and mind.  Over the years, I've erred often in not recognizing that my own desire to serve was clouded by a need to prove myself worthy, or to be "right."  My viewpoint was also often distorted by deep patterns of codependency.  Over the years, I slowly began to see that I, myself, am one of the sentient beings deserving care and compassion.  I've learned that I have to draw some boundaries, to take care of myself a bit better.  I've learned that sometimes, like some of the kids I had witnessed back in 8th grade, I just need to lighten up and play.

Yet, this commitment to serve all Life, to see through the delusions caused by my own graspings, to ascertain and share the truth, and to manifest wisdom still makes sense to me.  What else is there to do?

Finding Your Own Voice

Having sat and studied with several teachers and sanghas over the years, I've chanted a number of translations of the Bodhisattva Vows.  This can be a powerful experience. There is a certain resonance when chanting with others. There is also a resonance, perhaps beyond space and time, chanting with a lineage that has existed for over a thousand years.

Yet,  like the phrases used in Brahmavihara Practice, I think that it quite useful to experiment with the specific wording of these recitations,.  There are certain words that may ring with a deeper sense of meaning related to the causes and conditions of your own life than the traditional translations.  So, over the years, I've tweaked the four Bodhisattva Vows to fit my constantly evolving understanding of the work to be done -- on myself and in the world.

For example, for me, "saving" folks seems presumptuous and a bit too laden with the Judeo-Christian baggage of sin and salvation.  So, these days I vow to serve all sentient beings -- although that is, perhaps, even more daunting.  Similarly, extinguishing the "inexhaustible deluding passions," also seems a bit too harsh and Puritanical to me.  "Seeing clearly" the energies of passion and confusion feels a bit more gentle -- maybe even more realistic.  At times, I've also worked with the word "transmuting" those energies.  claiming more "agency" in the matter.  That word has a different flavor to me that I sometimes revisit and investigate.

Yet, whatever the wording, 50-something years after I first read Gaskin's version, I find myself still reciting the Bodhisattva Vows three times at the end of my morning meditation each day.  Maybe it's my cosmic connection to a "tradition", although it is the ragtag, nonlinear lineage of Hippie Zen.  Maybe, I'm just a slow learner with a fading memory who needs a constant reminder each day of what I'm trying to do here before I croak.  I dunno.

To Dream the Impossible Dream

Something I do know: It was only in the past few years that the word impossible really began to sink in.  Being the inveterate optimist, I had pretty much managed to ignore that piece of it.

At a certain point, though, I realized that part of me was still desperately clinging to the hope that we'd all finally "get it. " In that hope, humanity would  cruise off into the sunset in peace and harmony forever.  A Holy Hollywood ending was inevitable.  I hadn't really acknowledged that impossible may actually mean impossible.  Clearly, there'd be more work to do in opening my heart to truly appreciate the mess we are in.  I also noticed that I tended to cast myself as a hero in this cosmic episode of Mission Impossible.  Once again, more work to do.  I'd have to see more clearly, and accept, my own limits in doing something about it.  At age 74, that means being content with being a stagehand not a leading man.

So, how does Practice look when there are no guarantees -- and no glory?

Sitting here, taking a deep breath, straightening my back a titch,  relaxing my shoulders a bit, I open to the vastness of the present moment.  Sitting here, I feel my heart.  I can feel the grandeur and nobility of our human quest for creating a world where love saves the day.  I can also feel the tragedy and horror of the darker angels that continue to haunt our species.

Breathing in.  Breathing out.  I bow to Ceaseless Practice.

"Though it is impossible..."

* This link will take you to a site that includes
a wonderful scanned copy Hey Beatnik published on the Farm in 1974!

Thanks for this, Lance. I love starting out my Monday mornings listening to you. You have such a beautiful and open heart. You inspire me.
February 1, 2021 at 5:47 AM