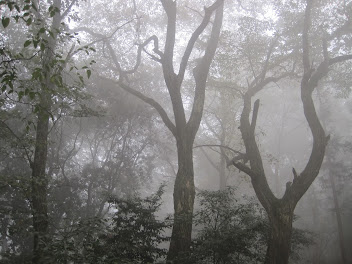 There was a time when a grey, gloomy morning like this could send my spirits spiraling downward.  Confined to the tunnel vision of my own thoughts and feelings.  I could get really depressed.  I would become oblivious to the Ongoing Miracle.

Although I would be dashed between the rocks and hard places of my own unattended childhood trauma and dysfunctional conditioning many times over the years, I was fortunate.  The Collective Kensho of the late 60's and my own Peek Experience of Infinite Perfection in 1972 gave me a strong enough jolt of the Real Deal to get serious about meditation and a spiritual practice in my life.  Although there were some fleeting dry spells, I've mediated regularly for a long, long time.

Now, at age 75,  it seems I've found a way to Not-Do Depression.  Although I am no stranger to sadness, the Practice has transformed my relationship to this emotional energy.  The inner belief structures and narratives that operated to lock depression in place just can't seem get a toe-hold anymore.  Instead, the story lines arise and disappear within the Gracious Spaciousness of Awareness that is readily accessible much of the time.  Of course, I put my butt on the zafu for at least an hour most days and try to take an entire day of mindful practice at least once a month. I also hit a deep re-set button with one or two three day fasting silent retreats each year.

So, here's the Deal.
Left without the continual mental chatter and conditioned reactions that create the "narrow chinks" of our habitual way of experiencing life, sadness and the other elements of depression, like all phenomena, are seen for what they are -- impermanent.  They are usually quite fluid and fleeting. They come and go of their own accord.   With Practice, I have learned to see through what in the past had seemed to be fixed states of depression.  What remained was a certain pattern of energy floating in the gracious spaciousness of Open Awareness.
(READ MORE)
The Practice
During our explorations on the zafu, we may, at times, access deep tears as ancient wounds and grief are released.  This is a good thing.  It's the body's natural way to release the energy.  In fact, my own depressed states were often the result of grief, anger, and fear frozen in place and locked into inner narratives that perpetuated depression.  Having the ice melt into tears released a lot of energy that I could channel into taking care of what needed to be done to deal constructively with Life as it presented itself.
As Practice has deepened, there are still some times that tears emerge as a healing energy.  Yet, these days, it doesn't usually go there.  Life being Life, the emotional energy of sadness may appear in moments of melancholy or brief bouts of bittersweet.  Yet, if this isn't resisted, if it is embraced with an open heart or mind, it usually doesn't develop any momentum.  If the habitual story lines that emerge are released, and we let go of our efforts to "figure it out," the depressive patterns don't develop a mind of their own.  They won't hit the down button.

It is certainly true that as the Practice unfolds, there can be moments of outright wonder and gratitude and bliss.  You may be blessed to experience all the big bang moments of human consciousness imaginable.  Yet, this isn't the Heart of the Matter.  In fact, an attachment to going for the gold and trying to get all the goodies in the spiritual dimension can hang you up, maybe even more than other forms of greed and grasping.  The Tibetan Buddhist teacher Chogyam Trungpa called this Spiritual Materialism and emphasized this point a lot.  I suspect he saw clearly how deeply his Western students had been conditioned by our super- charged capitalist "what's in it for me" upbringing.
And Then...
Over time, the Practice becomes quite ordinary.  It's no big deal.  It's simply something you do.  You "assume the position" -- again and again.  Then, you carry it into your life off the meditation cushion.  Ultimately it is about relaxing, releasing our own self-centered agenda, and opening our hearts to the present moment wherever we are.  Being Present, we feel the Presence of the One Love.

Thank you so much Lance! I found your account and your description very resonant with my own and very inspiring ❣️❣️🙏🏽