"When you see ordinary situations with extraordinary insight,
it is like discovering a jewel in rubbish."
-- Chogyam Trungpa,
The Myth of Freedom and the Way of Meditation

“So if you do something, you should be observant, and careful, and alert.”
―Shunryu Suzuki, Zen Mind, Beginner's Mind 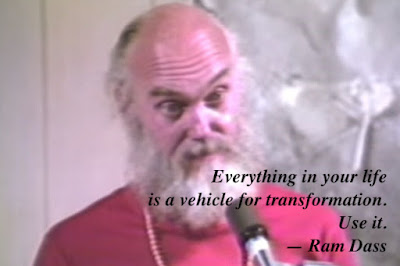 I was inspired to devote more time and effort to a Spiritual Practice in 1971 when I read Be Here Now.  Written by the late American spiritual teacher Ram Dass, this book touched millions of us.
Several years before, Ram Dass, (then known as Dr. Richard Alpert) had been fired, along with Dr. Timothy Leary, from the Harvard faculty.  These pioneering psychologists had run afoul of the powers that be for their study (and advocacy) of LSD and psilocybin as therapeutic drugs -- and as a means of inducing valid mystical experience.  Leading the way for many, they had "turned on, tuned in, and dropped out."
And what had they tuned into?  Like many other young people at the time, I was off to find out.  By that point, it was clear to me that there was more to Life than the mainstream society presented as Reality.
As I child, I was quite curious about the spiritual dimension to life.  One of my earliest childhood memories is sitting at the table being intrigued by the empty chair at the Passover meal.  I remember asking who Elijah was, and then wondering how -- and why -- he might stop by to join us.  A few years later I picked up on a friend's invitation and went to Catholic mass a few times.  (Holy Mary, Mother of God!? WTF does that mean?)  Then during the summers after my 3rd and 4th grades, I sat in a pew and squirmed my way through the fire and brimstone services of a Baptist minister in the chapel of a summer camp for poor kids.  I was drawn to the idea of love and kindness, but I wondered why Reverend Nelson and his God seemed so damned angry.
To be sure, I was drawn by something in those settings.  I did sense, however, that what was happening in those places didn't ring true to me.  Wandering around outdoors seemed more to the point.  And being a boy in the America of the 1950's, I didn't give it much thought. I spent more time learning to throw, catch, and hit a baseball than exploring the meaning of those experiences.
In the late 60's and early 70's, I had another bite at the apple.  With psychedelics and Asian spirituality becoming commonplace in the world around me, it was time.  The idea that you could actually do something (besides taking psychedelics) to cultivate a deeper connection to the spiritual dimension of life was inspiring.  I began to do yoga.  I meditated.  I was ready for more.
In Be Here Now, there was more.  I poured through the book.  Ram Dass devoted the entire third section of the book, entitled "A Cookbook for a Sacred Life," to a multitude of spiritual practices.
One of them leapt off the page as I read it.
(READ MORE)
Chopping Wood. Carrying Water. Doing the Dishes 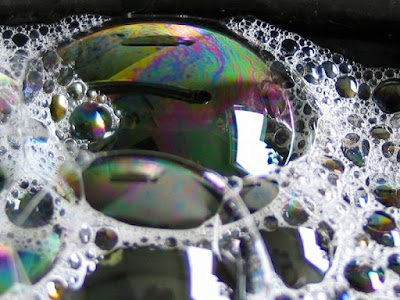 In the section devoted to Karma Yoga, the spiritual path of action, Ram Dass suggested something that had never occurred to me.  Rather than chanting or watching the breath or doing something "spiritual," you could take a regular mundane activity -- especially one you disliked -- and turn it into a form of meditation practice.
At that point, choosing the activity was a no brainer.  Moments before, I had walked away from a sink full of dirty dishes, perching mine, rather precariously, on top of the stack before fleeing.  (I hated washing dishes.)
Intrigued, I put the book down, took a deep breath -- and headed out to the kitchen to face the unsightly scene that had emerged over the course of the past few days.

Making an effort to let go the mental chatter and emotional grey clouds that dominated my attention, I began to focus on the physical sensations and sensory impressions I was experiencing. Staying present, moment to moment, I noticed that the warmth of the water felt wonderful on my hands in the chill morning air.   Moving slowly and carefully, the tactile sensations of plates becoming slick, smooth to the touch, was not only enjoyable, it was deeply satisfying.  Taking a moment to pause and expand my attention to the space around me, I came to my senses more fully.  Eyes seeing, ears hearing, I noticed the sunshine streaming through the window was creating momentary diamonds in the water pouring from the faucet.  There were emeralds, rubies, and sapphires dancing in the soap bubbles.  Beyond the soothing sound of my mechanical mini-waterfall, a cardinal began to sing in the tree outside the window.  Washing the dishes not only became tolerable, it felt magical, sacred.

I suppose there's lots not to like -- but only if you buy into society's prevailing attitude toward manual labor!  Programmed as we are in a capitalist society to feed our egos through acquiring wealth and status, these activities are assigned a low value. Considered lowly, even demeaning, by many, these necessary activities of day-to-day life are often avoided, then raced through haphazardly, sometimes begrudgingly, while our minds race elsewhere.
And there's more.
For many of us, the childhood experience of learning to clean up after ourselves was oppressive.  It often included coercion and punishment by parents who were exhausted, working long hours themselves, commuting back and forth from unsatisfying jobs.  Commonly, they then passed along their conditioning as "wage slaves." Even if the stick wasn't used, a carrot was.  Chores were tied to an "allowance." So, many of us learned to doing what we do for an external reward --  not for the intrinsic value of the experience itself.
"That's why they call it work," my dad used to say, a weak smile on his face, resignation and sadness in his eyes. Themselves driven by the "should's and shouldn't" of their parents, most having not been exposed to a meaningful spirituality in their lives, how could our parents train us in the value of "housework" as a Spiritual Practice?
Yet, here we are.  Let's face it. Unless we are affluent enough to hire others, in our real lives most of us have to clean, do the dishes and the laundry -- and (shudder) take out all the garbage we've created.  This is Life as it is.  Fortunately, these activities are the perfect ground for Mindfulness Practice.   Being fully present to what we are doing, we can experience Presence.

The routine tasks of daily living have been a staple of Zen Training throughout history.  Although there is, of course, formal meditation and liturgy, manual work is highly valued.  Fully engaged in what we are doing, we can refine our focus and concentration.  When we are doing becomes our meditation, we have the opportunity access a qualitatively different state of mind.  In the process, we can transform a dirty bathroom into the Pure Land of Amitabha Buddha.

Like any form of Practice, with time and careful attention, something shifts.  Letting the thoughts and feelings come and go without paying them undue attention, being present to what our body is experiencing, we come more fully into the present moment.  Mindful of the movement of our body, aware of the tactile sensations we are experiencing, connected to the sights, sounds and odors of the task at hand, we can open the gate to the Limitless Awareness that is always present.  If we are really paying attention, there are times that the miraculous nature of life becomes self-evident.
It just takes Practice.