I believe that the Real Revolution isn't about violence.  It's about the cultivation of love, wisdom and compassion in our individual lives -- and in the world.  I'm grateful that I'm not alone in seeing that.

Last year at this time, I attended one of the early meetings of the Refuge Recovery group in Oklahoma City as they shared their first reading from the newly published book, Refuge Recovery. The book's author and Dharma Punx founder of the Against the Stream Society, Noah Levine, Rocks!  Although his teaching is geared toward those recovering from drug addiction and alcoholism, I believe it's relevant to all of us.  In this modern world where most of us are addicted to the attitudes and behaviors promoted by a highly materialistic and individualistic culture, Levine is talking Real Revolution!

Since several people have asked me recently about his incredibly insightful and valuable addition to Dharma Practice in the context of recovery from addiction, I'm reprinting last year's post about Noah Levine's work-- and adding information on local Refuge Recovery weekly sitting groups.

I'm also adding a directory of other sitting groups in the Pioneer Valley to the MMM Website and would encourage folks here -- and elsewhere -- to seek out a local group to meditate with on a regular basis.  If you can't find one, start one.  It's how the Revolution happens!
One Love,
Lance
You Say You Want a Revolution?
First published, June 12, 2014. Revised.


“We have the ability to effect a great positive change in the world, starting with the training of our own minds and the overcoming of our deluded conditioning. Waking up is not a selfish pursuit of happiness; it is a revolutionary stance from the inside out,
for the benefits of all beings in existence.”
― Noah Levine, Against the Stream: A Buddhist Manual for Spiritual Revolutionaries

"There's a rebel within you.  It is the part of you that already knows how to break free from fear and unhappiness.  This rebel is the voice of your own awakened mind.
It's your rebel Buddha, the clear intelligence that resists the status quo."
― Dzochen Ponlop, The Rebel Buddha

I came across the work of Noah Levine a couple of years ago and got my hands of a copy of Meditate and Destroy, a documentary film featuring his life -- and his life's work with incarcerated youth and drug addicts in Los Angeles.  As the old saying goes, "it takes one to know one."
(READ MORE)
The wayward son of Buddhist teacher Stephen Levine, the years of Noah Levine's youth had been immersed in drugs, violence, incarceration -- and attempted suicides.  As he hit emotional rock bottom in a padded detoxification cell at age 17 he turned toward the meditation practices that he now shares widely.  Going forward to obtain an MA in counseling psychology and train with meditation teacher Jack Kornfield and others, Levine's blending of the traditional Buddhist teachings with the process of Recovery continues to touch thousands of lives.

Although there were some tattoos in evidence, the Oklahoma City group was much more diverse in age and appearance than I may have guessed.  I think that this speaks to the widespread appeal of Buddhist practice to members of the Recovery community.   Hot off the presses, Levine's book Refuge Recovery was the central focus of the meeting which also included a period of guided meditation and a period of personal sharing.  I was impressed to the point of tears by the clear-eyed sincerity and openness of the ten or so folks gathered to share Practice.

The language of Revolution offered by Levine, resonates deeply with me, of course.  The roots of my own spiritual inspiration are implanted deeply in the civil rights and anti-war movements of my youth.  We had our eyes set on Revolution: the creation of a world based on Love, Peace, Spirit, and Service.

Although the outer vestiges of the Dharma Punx of Levine's tribe are different than the hippies of my youth, my work with teenage "punks" back in the 80's made it clear to me back then that each of these forms of rebellion were a youthful reaction to the obvious greed, hatred and delusion of the mainstream culture.  I witnessed quite clearly that there was a deep aspiration for peace and kindness within and beyond the mosh pit.

Moving past the understandable knee-jerk reactivity of violence in both eras (we had the Weathermen after all), True Revolution calls for a deep personal transformation -- nothing less than the cultivation of the Compassion and Wisdom that lies at the heart of our True Nature.  Noah Levine's work articulates that clearly,  and I feel blessed to have crossed paths this week with some of his folks at a special time, their first reading of the newly released Refuge Recovery.  ( I just ordered my copy. ) 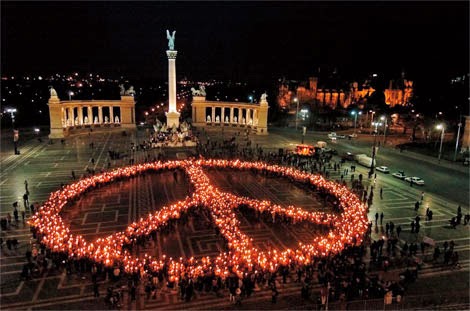 Through formal meditation and a commitment to self-awareness across the gamut of our lives, the Practice calls each of us to be Revolutionaries, to move past the self-centered individualism and materialism of the mainstream culture. The greed, hatred and delusion that constitutes the status quo isn't just wrong --it simply doesn't work!  It promises a life of unending suffering.

For more information:
Against the Stream Meditation Society: http://www.againstthestream.org/