One Day at a Time

“Every day we are engaged in a miracle which we don't even recognize: a blue sky, white clouds, green leaves, the black, curious eyes of a child—our own two eyes. All is a miracle.”
-- Thich Nhat Hanh 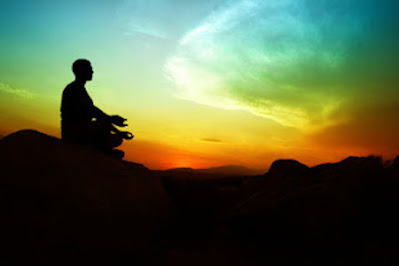 I was looking forward to it.
Although  a regular daily meditation practice is the foundation of Life and Practice for me, I've also experienced, first hand, the transformative power of silent meditation retreats.
For months now, I had planned to take a three day personal retreat on the weekend of the Vernal Equinox as I had done in the past.  I even penciled it in on my kitchen wall calendar in BIG CAPITAL LETTERS.

As Saint John (Lennon) once proclaimed, "life is what happens when you're busy making other plans."  It was a good thing that I had used pencil.  As it always does, Life happened.

With two Pfizer shots in my arm, and the strict isolation of the past year beginning to disappear in the rear view mirror, two out of my four children reached out for Papa Lance to jump into grandpa duty, including some in-person child care.  So, in a couple of blinks of an eye, not only was my weekend scuttled, my ritualized flow through a weekly schedule that had evolved over the past year was up for grabs.

I guess Springtime has a way of shaking things up.  What was only a hidden potential unfolds its wings and takes flight.  New sprouts push their way toward the sun.

In fact, within a week, a new sprout emerged.
(READ MORE)
A Day of Mindfulness

Even though I had to put the three day retreat on indefinite hold, by the following weekend, I was able to make the space to take a personal Day of Mindfulness.
I needed it.
Although it is true that a regular daily practice is essential, extended periods of time in silent practice are extremely valuable. They can take you deeper -- much deeper.
So, after another long, full, day on Friday, I closed the lid on this old Macbook.  Then, I  turned off the two iPhones ( a long story in itself), replaced the shroud over the flat screen,  and Just Sat Still at my altar for awhile.  At about 8 PM (I'd been up since 4 AM), I headed to bed -- without my book or the strains of Jazz a la Mode on the radio to keep me company.  (I was taught that even reading should be avoided during a meditation retreat because it reinforces the momentum of discursive thinking. )
I spent the entire day on Saturday in silence, including hours and hours of Just Sitting Still.  Arising at 4 AM, I sat in formal meditation at home at my altar, then traveled to Unity Park in neighboring Turner's Falls to Sit and watch dawn emerge over the Connecticut River.  Later, I traveled out to a favorite spot on the Deerfield River to see the sun recede behind the hills to the west.

It didn't take long to settle in. (Sometimes, it has taken days.)

During my first Sit at Unity Park, the squeaking wheel of my own internal hamster wheel came to a rest --  and I came to my senses.  In the stillness, the Universe made it's Presence known.  In the vast, spacious sea of open awareness that had emerged, the world again appeared as the miracle that it always is.
In the light of the rising sun, my eyes and ears -- and heart -- feasted on the gravity-defying dance of the myriad birds and waterfowl that soared through the cloudless blue sky, and the wild array of chirps, honks, quacks, twitters, whistles, and melodies they left in their wake.  Then, just before I was ready to leave, a riotous chorus of joyfully clucking amphibians joined in.  I followed the sound a hundred yards or so, to gaze in delight as dozens of frogs weaved interlocking circular patterns of ripples across the otherwise-still surface of a sizeable vernal pool.  I sat back down, awash in amazement and delight, for quite awhile.
Then, I returned home to eat, do a bit of mindful housekeeping, and sit some more to the music of neighborhood birds, the wind, and the surf-like hissing of the traffic emerging and receding outside the window.  Then, on the eve of my 75 birthday, I engaged in one of my favorite new practices.  I took a nap.
Later that afternoon, I headed out to a special spot and perched on a rock outcropping overlooking the Deerfield River near Charlemont.  There, the sound of the river, rollicking as whitewater a bit upstream from where I was sitting, sang as it cascaded over ancient stones. The wind dancing through tawny branches, still leafless, but not at all bare or barren, hummed along.
Then, as I prepared to leave, as if on cue, a chorus of spring peepers in the fields beyond the river chimed in to continue the operetta begun hours before by their Connecticut River cousins.  I had to sit back down and listen for awhile longer, delighted with life just being life as it is.

I returned home for dinner, did bit of housework, then returned to my bedroom altar to sit again. Then, toward the end of what I thought would be my final hour of sitting practice, came the piece de resistance: March's full moon appeared over the houses and hillside across High Street. An excited schoolboy, I grabbed my binoculars and watched it sail through the branches into a clear sky for another half hour or so before heading to bed at 8 PM.

What a Difference a Day Makes 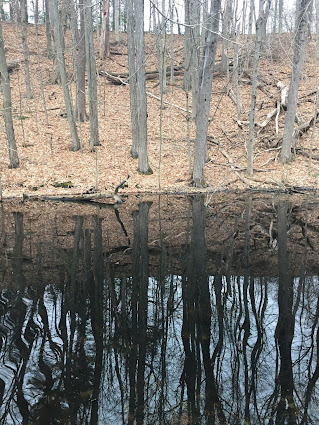 I awoke at about 4 AM on Sunday morning and Sat at the altar for an hour in the pre-dawn darkness.  When a neighborhood cardinal began singing, I decided to jump in the car to head out to Unity Park again to witness dawn amidst the natural splendor from my perch on the shore of the Connecticut River.

What a difference a day makes.
Rather than sit in the comfort of a balmy morning, a cold front was wending its way across the area and the temperature had dropped significantly.
The sun was nowhere to be seen.
Instead, a thick blanket of grey clouds loomed over the river.  I walked over to see that the coal black mirror of the vernal pool was completely still. The frogs had disappeared from view.  They didn't make a peep.
The pond seemed quite content with the silence. In its deep stillness, it perfectly mirrored the inverted images of the trees and hillside on its southern border.  I, too, was content to sit in silence.

There, on the banks of the Connecticut River, life flowed on.  Like Life itself: everything had changed, yet nothing was essentially different.  As always, the very ordinary and the sacred embraced one another in the Timelessness of Real Time -- and danced.  And my heart danced along.  (In One Love, these are not separate things, nothing is...)

Now, hours later, I'm back home at the computer.  In the majesty of the present moment, time and space appear to be merely ripples in the pond.   With the sound of a spring rain and the surf-like, hissing sound of an occasional car outside the window, I still feel the Presence.  My heart is dancing through my fingers.  That's good enough for me.

So, what are you up to?  Is your dance card full yet?

I do hope that in reading this you'll be encouraged to turn off the devices and do a Day of Mindfulness yourself.

If you need some additional structure and support to explore longer periods of silent practice, you're welcome to join me on Zoom for "Be Still and Know: A Day of Mindful Practice on Sunday, April 18. " It's not the same as the incarnation of Be Still and Know at Community Yoga that I've offered monthly for the past few years, but it's still free and open to all.

There's more information HERE.  Feel free to email me at thishazymoon@gmail.com to connect.
Posted by Lance Smith at 5:13 AM

I found your musing very poetic and inspiring. Thank you, Lance! Karen F.