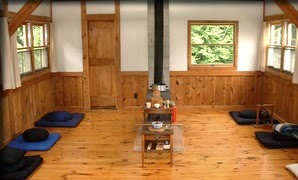 The Valley Zendo was created in the mid 1970's through the efforts of three monks from Antaiji Monastery in Japan and several American lay practicioners.  Students of Roshi Kosho Uchiyama, Antaiji's founder and abbot, they brought a clean and simple form of Soto Zen with them.  As well as a daily practice, students in this lineage conduct a 5 day intensive retreat ten months out of the year.  Uchiyama believed in a sesshin "without toys".  Unlike intensive retreats offered in other Zen lineages now practicing in the United States, there is no formal oryoki (a highly ritualized formal meal), dokusan (a private interview with a Zen teacher complete with bows and bells), and, until recently, no chanting during sesshin.  (Evidently Reverend Ikeda, like his dharma brother Shohaku Okumura of the Sanshin Zen Community in Bloomington, IN, have now begun one simple chanting practice each morning in deference to the larger Soto Zen community.) The day consists of sequences of 50 minutes of sitting meditation, then 10 minutes of walking meditation beginning at 5:10 AM and ending at 9 PM.  The only "interruptions" are the three simple meals eaten in silence and a brief period afterwards to clean up.
(READ MORE)
The primary Zazen meditation practice in this tradition is Shikantaza, which, roughly translated, means "just sitting".  The basic instruction is to sit erect and maintain awareness of one's body and breath, allowing thoughts to emerge and dissolve without following them or trying to get rid of them.  In Uchiyama's teaching "opening the hand of thought" allows us to experience directly the Reality of your Life rather than what Uchiyama calls "the scenery of your life."  This is the at heart of Zazen -- on and off the cushion.  As we touch our True Nature, our inherent wisdom and compassion emerge.

What does that have to do with the horror of September 11?

It would seem to me that as more of us commit to the cultivation of kindness, clarity and compassion in our lives, the pool of greed, hatred, and delusion that breeds violence will be lessened.  As Thich Nhat Hanh says in order to help create peace in the world, we have to "Be Peace".  The influence of our Practice radiates.  It operates on the interpersonal level and on the transpersonal level. 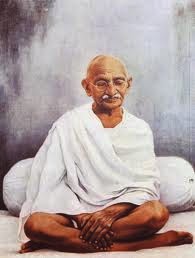 This in not to say that social and political action isn't worthwhile.  In fact, individual and organized action is often necessary,  It's where the rubber meets the road.   (I'll be traveling with a busload of locals to NYC for the People's Climate March next Sunday)

Yet, as Gandhi, Dr. Martin Luther King, Jr. (and Buddha and Jesus before them) knew: hatred breeds hatred, violence breeds violence.  Action that is based in the spirituality of love and non-violence is not only effective, it can be deeply transformative -- for all involved.

As someone who was impatient and easily angered as a young man, I can attest to the value of Mindfulness Practice over the years.  To be clear and kind and compassionate with those you love is challenging enough.  To be clear and kind and compassionate to those who don't appear to "get it" and are supporting environmental devastation and warfare takes commitment and a disciplined effort.  It takes Practice.

Along the way you learn the many ways that you yourself don't get it either.  With Practice, the seeds of our own greed, hatred and delusion become apparent.  As we face our own "demons"with Compassion, our capacity to Be compassionate develops.  It's there that our own tranformation -- and peace in our old suffering world --begins.

*As well as an anonymous saying, this is the title of a book written by Sylvia Boorstein:
Don't Just Do Something. Sit There: A Mindfulness Retreat with Sylvia Boorstein
Posted by Lance Smith at 2:34 PM