A Time to Break Silence

Yesterday, I spent much of the day in silence.  Today, in honor of Dr. Martin Luther King, Jr. Day, I'd like to share a piece my identical twin Brother Lefty posted at Rambling On with Brother Lefty Smith, S.O.B.* If you haven't heard Dr King's "Beyond Vietnam: A Time to Break Silence" -- delivered at Riverside Church, exactly one year to the day before his assassination, you can listen to it at the bottom of the page.

"When machines and computers, profit motives and property rights,
are considered more important than people, the giant triplets of racism,
extreme materialism, and militarism are incapable of being conquered."
-- Dr. Martin King Jr.
Speech at Riverside Church, April 4, 1967

"It is my firm belief that Europe of today represents not the spirit of God or Christianity but the spirit of Satan.
And Satan's successes are the greatest when he appears with the name of God on his lips.
Europe today is only nominally Christian.
In reality, it is worshiping Mammon."
-- Mahatma Gandhi,
Young India, August 9, 1920. 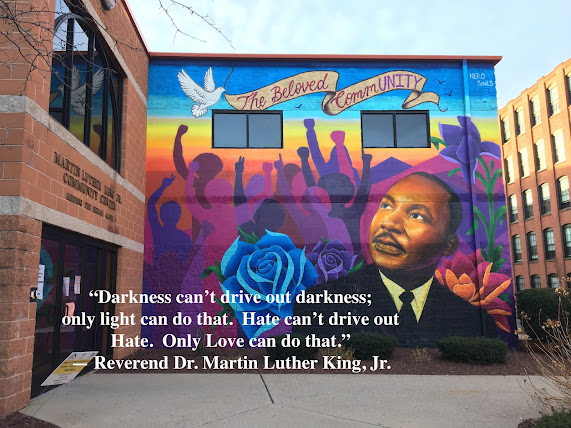 
For decades now, the corporate media has celebrated Dr. King's "I Have a Dream" speech -- and assiduously buried Dr. King's views on economic justice, materialism, and militarism.  Like Mahatma Gandhi, King's message was essentially Spiritual.  They each saw clearly that Mammon worship, the soul-sucking evil of materialism/consumerism, was alive and unwell, lurking in the belly of capitalism.

Throughout history, racism and economic exploitation have always walked hand in hand.  The prosperity of the capitalist English Empire and that of it's rebellious offspring, the USA, were built squarely on the horrors of genocide and slavery.  Sadly, although its current forms (cultural genocide, systemic poverty, and jailhouse slavery) are widely ignored or explained away, this continues today.

Like my identical twin brother, Lance, I usually tend to be more Buddhist than Christian in my lingo.  Yet, I just gotta say it out loud:  Capitalism is the work of the freakin' DEVIL!  I agree with Mahatma Gandhi. Capitalism the dark side of the force.  It is built on exploitation, and it fosters greed.  It is capitalism that drives climate change -- and it is taking aim on the survival of the planet. 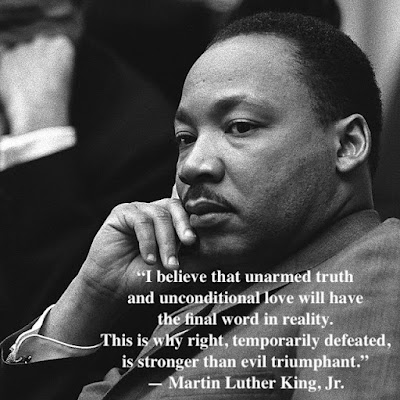 Dr. King, like Gandhi, was a Holy Man.  He sought to alleviate the suffering created by a political and economic system that feeds on greed, hatred, and delusion.  Like many other prophets throughout history, both King and Gandhi threatened the ruling order  -- and were martyred.

Although Dr. King focused on the evil of racism in his "I Have a Dream" speech that late summer day in Washington DC, his words were delivered to the throng that had assembled for the March on Washington for Jobs and Freedom.  This effort, which he had helped organize, challenged economic exploitation and suggested bold governmental action to alleviate poverty. The FBI claimed the event was inspired by Communists and lobbied to prevent it from happening.

King continued to march.  He continued to preach love and championed a non-violent response to a system that has always used violence.  Like Jesus of Nazareth, and a myriad other martyrs, Dr. King knew full well that he would most likely be killed for challenging the ruling order -- and he chose Love instead.

Dr. King's assassination, five years after the "I Have a Dream" speech, occurred when he traveled to Memphis to support striking Afro-American municipal sanitation workers as the leader of the National Poor People's campaign.  That campaign demanded an Economic Bill of Rights which included five planks:

1. "A meaningful job at a living wage"
2. "A secure and adequate income" for all those unable to find or do a job
3. "Access to land" for economic uses
4. "Access to capital" for poor people and minorities to promote their own businesses
5. The ability for ordinary people to "play a truly significant role" in the government

When's the last time you saw the Economic Bill of Rights highlighted in the corporate media coverage of Dr.  King's life?

A Time to Break Silence

These are unsettling times.  There is no doubt that Trump's legion of misanthropes, materialists, and military men waiting in the wings to reclaim power.  Now, more than ever, it is a time to break silence.  Dr. King did so, dramatically, on April 4, 1967, at the Riverside Church in New York City.

On that day, Dr. King proclaimed, "these too are our brothers," and came out against the US involvement in the Vietnam War with a passion and an eloquence that many believe caused his assassination exactly one year to the day later.

The corporate media today ignores this speech and remains silent.  I hope you don't.  Please listen and pass this along.  Then join some folks and speak out -- with love in your heart!

It's a tough job, but somebody's got to do it!

(More Rambling on with Brother Lefty )


Beyond Vietnam: A Time To Break Silence

Fired up into the point. This planet is in a sad State of affairs and an evolution like mankind is never seen. The Awakening that begin with the end of the mind calendar as loud people all over the world to see that we are civilization being modified and used like so many civilizations before us. Modified right to the DNA, to the core of us. A controlling takeover that we are saying no more. You're not going to tell me how to feel I'm just think what I should do to be happy. The 1% at the top of the pyramid needs the rest of us to hold them up there, they know it and they are getting scared and forcing more restrictions. Men like Martin Luther King or head of your time. Let us all stand against slavery that is so boldly expressing itself in plain sight