To Everything There is a Season

“Birth and death are a game of hide-and-seek.
So laugh with me, hold my hand,
let us say good-bye,
say good-bye, to meet again soon...”
― Thich Nhat Hanh
No Death. No Fear.
The announcement that Thich Nhat Hahn had died today at Tu Hieu Temple, the monastery that he entered as a novice monk at age 16, didn't surprise or sadden me.  The venerable Zen Master, stricken by a massive stroke in 2014, had obviously chosen to return home to his beloved Vietnam to make this transition.
Instead, when I read my friend's message, a full and deep in-breath emerged naturally.  My heart was filled with an expansive sense of gratitude.  Thay's teachings and his kind, clear, wise, and peaceful presence has graced my life -- and the lives of countless others.
It continues to do so.
I was fortunate enough to cross paths with Thich Nhat Hahn twice during the 1980's. I first attended a five day retreat where I took the 14 Training Precepts of the Tien Hiep Order from this wise and gentle soul.  Then I attended a one day retreat at a Thai Buddhist Temple west of Chicago.  There, I sat in the front row, about ten feet from him, as he stood at a chalkboard and displayed the depth of his scholarship with a gentle brilliance.  Yet, I never had a personal conversation with him.
I had asked about meeting him during the five day retreat.
"He's not that kind of teacher, "Arnie Koestler, Thay's disciple and founder of Parallex Press, explained as we chatted during a stroll in the woods of the Catholic retreat center that hosted the retreat.
"What kind of a teacher is he then?" I wondered.
I may have been given a hint the next afternoon at the end of the lay ordination ceremony.  There, I was given a folded slip of paper announcing the dharma name that Thay had selected for me.  As a couple of hundred other retreatants in attendance on the grounds of a Catholic seminary north of Chicago had done, I'd submitted a photograph with my application for membership in the Order.  I was told that Thich Nhat Hanh would meditate for a few moments on the photograph then assign me the "appropriate" dharma name.
Although I can be somewhat skeptical about such things, I was blown away as I opened the slip of paper to read the name he had chosen for me.  At that point in my life, as well as being the Executive Director of the Center for Conflict Resolution, I was an on-again, off-again, folksinger/singer-songwriter.  There, inscribed in both Vietnamese and English was Thay's take on my path: True Heartsong.  When I returned home to Madison, Wisconsin, I took the instruments out of the closet and dusted them off.
Then and Now
If you've been following this blog as I've meandered through the past ten years of Life and Practice, you may have noticed that the teachings and practices of the Lojong tradition of Tibetan Buddhism have often taken center stage in my life after I came across the teachings of Pema Chodron in 2006.  I cast a Lojong slogan each day.  I practice Tonglen (and Joanna Macy's variant "breathing through") often as I encounter the more troubling aspects of the human condition.
During this past decade, I've also continued to integrate the experiences and practices I had in retreat and the conversations I've had with the venerable Joanna Macy, and with the late Stephen Levine years ago, as well as the experiences and conversations I've had with other teachers and students while I was in residence at Insight Meditation Society and Zen Mountain Monastery.
Yet, sitting here right now, I realize that for weeks and weeks, the simple and clear mindfulness guidance that Thich Nhat Hanh offered in a 2010 Lion's Roar article that I re-read and shared with a friend in December has become my "go to" practice during each morning's meditation.
It's felt like returning hOMe.
Distilling the Anapanasati Sutra to its essence, and adding instruction on walking meditation, Thay provided five basic practices in that article that have readily allowed me to bring my awareness to the sacred miracle of the present moment -- on and off the zafu -- each day.  Sitting here at this moment, breathing in and breathing out, hearing the crows stirring to greet the dawn emerging outside the window, feeling my fingers dance along this keyboard, the teachings that Thich Nhat Hanh presented in No Death. No Fear become self-evident.  There is no boundary between this moment and eternity, no barrier separating nothing and everything.  Who we truly are is nothing more, nothing less. than everything that has ever been, is, or could possibly be.  I know that in my heart.
Death? What's to fear? 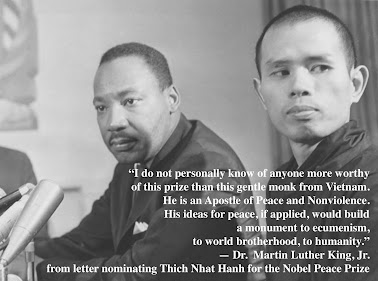 OMG!  You just can't make this stuff up.  Although Lion's Roar has published many articles over the years on Thich Nhat Hanh's teachings, I surfed over to their website just now to include a link to that particular article.  Guess what?  They've re-posted that very same article today with the announcement of his death.  Here's the link.
Coincidence? Synchronicity? The Master playing hide and seek?
Maybe, Thich Nhat Hanh is that sort of teacher!
Perhaps, it's time to dust off the instruments again?
Posted by Lance Smith at 10:00 PM

Thanks Lance. Yesterday as I was reflecting on Thich Nhat Hanh's passing, I knew I could count on you to write about him this week. I hope you're well <3

Lance! My only surprise here lies in your surprise to see the link you were going to include in the article already included with their announcement of Thich Nhat Hanh's death. You usually march to the beat of these of drummers. Why would this time be any different?
Just a subtle observation!
One Love my friend.